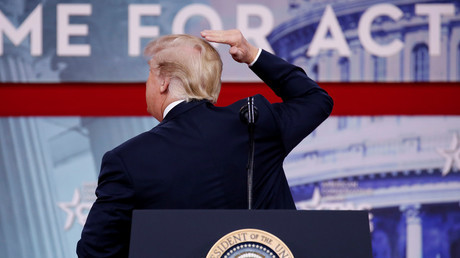 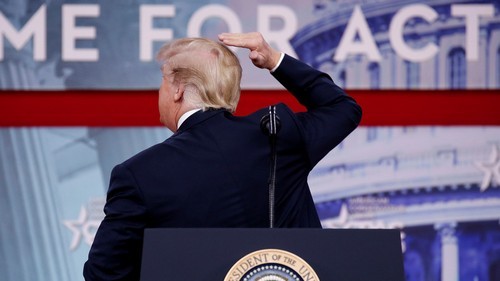 President Donald Trump took time out from his speech at the Conservative Political Action Conference (CPAC) to address the elephant in the room, or rather, the huge bald patch hiding under his hair.

Trump’s hidden, gaping bald patch set the internet alight earlier this month when it was spotted under his mane exposed by a cruel gust of wind. Trump, who is said to have a preoccupation with his hair, is likely to have felt embarrassed by the exposure, but hid it about as well as he hides the back of his skull on the CPAC stage on Friday.

I’m still traumatized by seeing the back of Trump’s bald ass head when the wind blew his hairpiece out like a flap on a plane. It revealed something no one should ever see. I felt like that lieutenant on the Death Star that saw the back of Vader’s head without the helmet!

Soon after starting his speech at the conference, considered the biggest annual event in American conservative politics, the president appeared to become distracted after spotting himself on the large screens behind him.

“What a nice picture that is. Look at that. I’d love to watch that guy speak,” Trump said. “That’s so nice.”

He then patted his hair and turned his back to the crowd, pretending to fix the back of his hair. “Aw, I try like hell to hide that bald spot folks, I work hard at it,” Trump said. “It doesn’t look bad, hey, we’re hanging in!”

“We’re hanging in there right? Together, we’re hanging in,” he said, before moving on to list his political achievements. Trump has spent decades insisting his complex comb over is completely natural. In January, his doctor confirmed he takes Propecia, a drug used to counter male-pattern baldness.

Did you see Trump make fun of himself??

Trump ?? to big screen:
“What a nice picture that is. I love to watch that guy speak. I try like hell to hide that bald spot”

Got to love this man and his brutal honesty

In his book Fire and Fury, Michael Wolff shares insights into Trump’s efforts to hide his baldness. According to the book, Trump’s daughter Ivanka has told her friends details of the lengths to which Trump goes to fashion his hair into a seemingly non-bald style.

“She often described the mechanics behind it to friends: an absolutely clean pate – a contained island after scalp-reduction surgery – surrounded by a furry circle of hair around the sides and front, from which all ends are drawn up to meet in the center and then swept back and security by a stiffening spray,” the book reads.

Is the US president using tariffs as a political weapon?