A tract of Amazon jungle is seen after a fire in Boca do Acre, Amazonas state, Brazil August 24, 2019 Bruno Kelly/ Reuters

Hundreds of new fires are raging in the Amazon rainforest in Brazil, according to official data, as six of the nine states in the region requested military assistance to combat the record blazes.

Data from Brazil’s National Institute for Space Research (INPE) said some 1,663 new fires were ignited between Thursday and Friday. More than 1,200 of those fires were spotted in the Amazon region.

The official figures show 78,383 forest fires were recorded in Brazil this year, an 84 percent rise over last year’s figure. More than half of those were in the Amazon region.

Environmentalists have said farmers clearing land for pasture were responsible for the uptick in fires.

The Amazon is the world’s largest tropical rainforest and its protection is seen as vital to the fight against climate change because of the vast amounts of carbon dioxide it absorbs.

Some 44,000 troops will be available for “unprecedented” operations to put out the fires, Defence Minister Fernando Azevedo said, adding that forces were heading to the states that asked for help to contain the blazes.

The military’s first mission will be the deployment of 700 troops to the area around Porto Velho, capital of Rondonia, Azevedo said. He added that the military will use two C-130 Hercules aircraft capable of dumping up to 12,000 liters of water on fires.

Multiple fires billowing huge plumes of smoke into the air were raging across a vast area of Rondonia on Friday, AFP news agency reported.

Several residents in Porto Velho said what appeared to be light clouds hanging over the city of half a million people was actually smoke from the blazes. 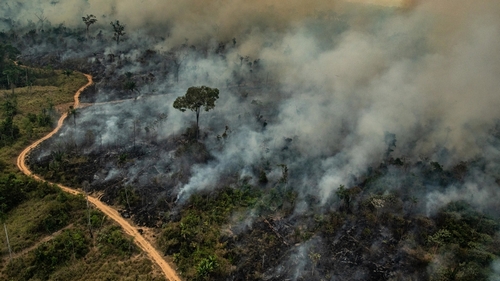 The Brazilian military operations came after widespread criticism of Bolsonaro’s handling of the crisis. Azevedo defended the government response, however.

“It shows the concern of Bolsonaro’s government about this issue,” he said. “It was a very fast response.”

The defense minister noted US President Donald Trump’s offer in a tweet to help Brazil fight the fires, and said there had been no further contact on the matter.

“Any help is welcome in respect to the fires,” he added.

Alfredo Sirkis, executive director of think tank Brazil Climate Center and a founder of Brazil’s Green Party, said while he supported military involvement, he doubted that anyone would be able to put out the existing fires.

“Once you have a huge forest fire like that, especially when you don’t have all the kind of forest fire-fighting equipment that you have in places like the US or Portugal, it’s difficult to extinguish,” he told Reuters.

“They’ll only be extinguished by themselves depending on the weather conditions.”

Environmental specialists say the fires are coming amid increasing deforestation in the Amazon region, which in July took place at a rate four times that of the same month in 2018, according to data from INPE.

Bolsonaro has previously attacked the institute, describing its data as lies and engineering the sacking of its head.

The blazes have stirred outrage globally and is a major topic of concern at the G7 meeting in Biarritz in southern France. The growing crisis also threatens to torpedo a trade deal between the European Union and South American countries, including Brazil, that took 20 years to negotiate.

Donald Tusk, president of the European Council, told reporters at the G7 that it was hard to imagine European countries ratifying a trade pact with the Mercosur bloc as long as Brazil fails to curb the fires ravaging the Amazon.

French President Emmanuel Macron, who has taken the lead in pressing his Brazilian counterpart over the fires, had earlier accused Bolsonaro of lying to him about Brazil’s stance on climate change. 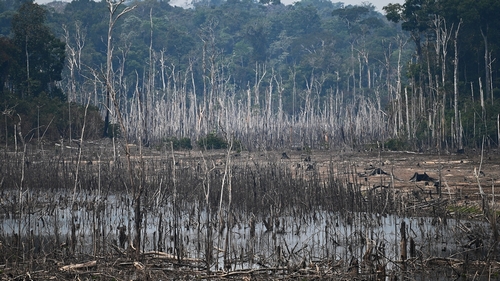 Official figures show 78,383 forest fires have been recorded in Brazil this year AFP

In an escalating war of words between the two leaders, Bolsonaro denounced what he calls Macron’s “colonialist mentality”.

“There are forest fires all over the world, and this cannot be used as a pretext for possible international sanctions,” Bolsonaro said on Friday.

Earlier in the week, he had accused non-governmental organisations of deliberately starting the fires after their funding was cut.

Brazil’s powerful agriculture sector – which strongly supports Bolsonaro – has expressed concerns over the president’s rhetoric, fearing boycotts of their products in key markets.

The Folha de S Paulo newspaper, in an editorial on Saturday, the warned that Bolsonaro’s “bravado” had worsened the crisis caused by accelerating deforestation.

“The damage to Brazil’s image is done and it could have important trade repercussions,” it said, adding: “Nationalistic bravado will not win the game this time.” 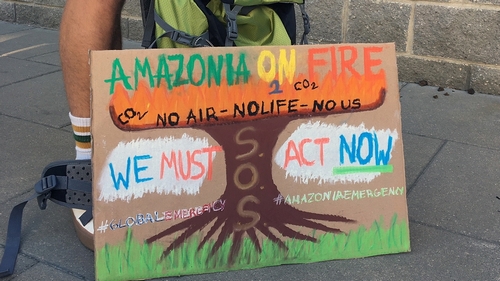 The blazes have stirred outrage globally, with thousands of people protesting in Brazil and Europe on Friday AFP