Kuala Lumpur, Malaysia – Former Malaysian Prime Minister Najib Razak will find out on Monday whether he has to enter his defence to charges he siphoned millions of ringgit into his personal bank accounts, in the first of a series of trials related to the multibillion dollar corruption scandal at state fund 1MDB.

Former Malaysian Prime Minister Najib Razak will find out on Monday on whether he has to enter his defence in the first of a series of trials into state fund 1MDB. He has denied wrongdoing. File: Vincent Thian/AP Photo

Judge Mohd Nazlan Mohd Ghazali, an Oxford graduate who was once the legal counsel at Malaysia’s biggest bank, will start delivering his decision at 10am (02G). If the judge decides the prosecution has established a prima facie case, 66-year-old Najib will need to enter his defence. If not, he will walk free.

The trial, which began on April 3, centres on SRC International, a unit of 1MDB, where Najib faces a total of seven charges – one of abuse of power, and three each of money laundering and criminal breach of trust.

Attorney General Tommy Thomas opened the trial by saying that the former prime minister and finance minister had “near absolute power” and was “directly involved” in decision making at SRC, where he was an adviser, and 1MDB, where he was chairman of the fund’s board of advisers.

Over the next 58 days, through 57 witnesses and hundreds of pages of documents, the prosecution laid out its case.

At the end, Thomas told the court there was “overwhelming evidence” against Najib and the former prime minister should be required to enter his defence. 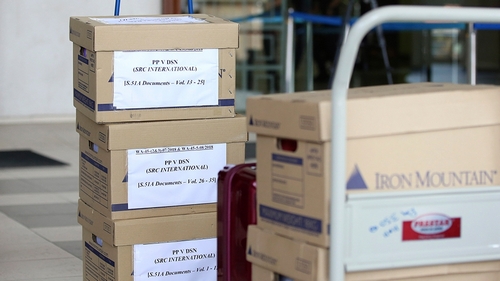 The prosecution compiled hundreds of documents in evidence for the SRC case. Annice Lyn/AP Photo

While it was the scale of alleged wrongdoing at 1MDB – some $4.5 billion misappropriated according to authorities in the United States in a scandal spread across at least six countries – that contributed to Najib’s downfall in May 2018 and Malaysia’s historic change in government, the issue has slipped down the agenda amid the slow pace of the trials and testimony that mostly detailed impenetrable financial transactions.

“After two years people are doubtless tiring of all this,” said Clare Rewcastle Brown, the London-based journalist who helped blow the whistle on what was happening at SRC and 1MDB on Sarawak Report. “But what is coming out of the trial is fascinating and internationally significant. How can Malaysia let the world’s most notorious kleptocrat off the hook.”

A sluggish economy has also shifted the spotlight away from the courtroom where Najib’s second trial in relation to 1MDB trial began in August. He faces 25 charges in that case.

“People are tired,” said political analyst Asrul Hadi Abdullah Sani. “People are worried about the economy, putting food on the table and the cost of living. It’s the bread and butter issues that are affecting people and they want answers from the government on these issues.”

Najib, who remains an MP in the east coast constituency that was once his father’s, has used his defeat to reinvent himself as ‘Bossku’ on social media, posting pictures of himself posing with bikers, and tucking into street food.

On November 1, a day after being given medical leave from court because of an eye infection, he was pictured in Tanjung Piai in the southern state of Johor campaigning in a by-election that will take place on Saturday.

The move drew a rebuke from the judge in the 1MDB case while Judge Mohd Nazlan has also reprimanded Najib for his tardiness during the SRC proceedings.

Prosecution witnesses ranged from officers at the Companies Commission to the executives at the bank that looked after his personal accounts and detailed lavish credit card spending at designer boutiques and luxury hotels.

Former second finance minister Ahmad Husni Mohamad Hanadzlah also took the stand, saying he was left feeling like the ‘office boy’ when it came to decision-making involving SRC and 1MDB.

The former chief executive of the civil servants pension fund was also a key prosecution witness with the charge of abuse of power relating to RM4 billion that was loaned from the fund to SRC in 2011 and 2012 and which Najib allegedly approved.

Akhbar Satar, who was an officer with Malaysia’s anti-corruption agency and formerly the president of the Malaysian chapter of Transparency International, said the commission would not normally proceed with a prosecution without strong evidence of wrongdoing for each charge.

“After looking at what transpired during Najib’s trial, I believe it will be called for defence,” Akhbar told Al Jazeera.

“In a society governed by the rule of law, judges must come to an independent decision based on the law and his objective assessment of the evidence presented in court.”

The defence has argued that Najib was not aware of what was happening and was misled by others, including Jho Low, a Malaysian financier who is now a fugitive, and last month reached a $670 million settlement with the US over assets allegedly bought with money misappropriated from 1MDB.

If the judge decides there is a prima facie case against Najib in relation to SRC, proceedings will get underway on December 3 and the former prime minister will need to decide whether to testify under oath and allow himself to be subjected to cross-examination.

He could also opt to deliver an unsworn statement from the witness box without the risk of cross-examination, or not give evidence at all.

Malaysians will be watching as the first Malaysian prime minister to stand trial for corruption ponders his next move.

“I don’t think they’ve forgotten (about 1MDB),” Asrul said. “They just want to know whether Najib will be jailed or not. It’s as simple as that.”