European diplomats are stepping up pressure on Indonesia to look into the case of a Polish man, who has been jailed in its easternmost region for more than a year, amid reports of his declining health.

Jakub Skrzypski is the first foreigner to be found guilty of an attempt to overthrow the Indonesian government, and imprisoned under the Article 106 of the Indonesian criminal code.

He was sentenced to five years in prison in May. Since his arrest in West Papua in August 2018, he has been detained in the town of Wamena, which is one of the several places in the region that saw a wave of deadly violence in recent months.

Skrzypski has denied the allegations and is appealing his conviction.

As he awaits for the result of his appeal, the European Union and the Polish government vowed to press Jakarta to resolve the issue.

Last week, European Union Ambassador to Indonesia Vincent Piket met Indonesia’s Law and Human Rights Minister Yasonna Laoly. Among the agenda listed in the meeting was the case of Skrzypski.

EU Spokesperson Maja Kocijancic said European diplomats have asked Indonesia earlier this month to review the case and transfer the Polish man to Bandung, where he could receive visits from a representative of the Polish consulate.

In October, the European parliament had referred to Skrzypski as a political prisoner, and expressed concern of his continued incarceration, given the unrest in West Papua. It had demanded for the man’s release and deportation to Poland.

Poland’s foreign ministry claimed there were procedural mistakes during the court proceedings, and the case’s connection to the current political situation in West Papua adds to its complexity.

Last week, a Polish embassy official visited Skrzypski, and urged the government to treat him under international standards.

Marsudi reportedly assured him that the trial will be fair and the consul in Jakarta will have free access to the detainee.

But Al Jazeera learned that it was not always the case, and several diplomatic notes regarding the Pole’s detention were reportedly ignored.

Skrzypski’s lawyer, Latifah Anum Siregar, also told Al Jazeera that her client has long complained about his condition at the police detention centre, where he is kept instead of the regular prison facility. 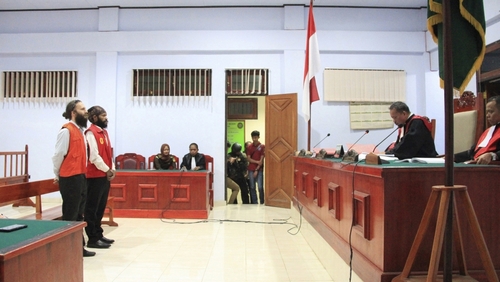 Skrzypski, left, seen here with his Indonesian co-defendant Simon Magal, has denied the charges against him and called his trial a ‘sham’ George Yewun/AP

Latifah said Skrzypski has not been allowed out of his cell for walks and could not be seen by a doctor.

Latifah, who is based in Papua provincial capital, Jayapura, and the Jakarta-based diplomats also have to deal with long hours of travel to reach Wamena.

While Skrzypski’s life is not under direct threat, some locals who used to bring him food have left since violence erupted in the region.

When Skrzypski suffered severe eye inflammation, nobody was available to treat him as most of the doctors have also reportedly fled.

In August 2018, he was travelling across the region, briefly crossing to the neighbouring Papua New Guinea.

Indonesian police arrested him and accused him of joining the separatist West Papua National Liberation Army – an armed group that Jakarta calls a terrorist organisation.

Initially, the police claimed to have evidence that he was involved in arms trading, but the allegation was not raised during the trial.

Skrzypski rejected all the criminal charges, but admitted to have met people who turned out to be the members of the National Committee for West Papua, which supports a non-violent approach to Papuan independence.

Latifah, his lawyer, said Skrzypski was merely visiting friends he met online and did not intend to join any organisation.

In May, Wamena district court found Skrzypski guilty and sentenced him to five years in prison. Local student Simon Magal, who met the Pole, was also jailed for four years.

Skrzypski rejected the verdict, saying all the charges were trumped up and called the trial a sham, alleging the prosecution witnesses were bribed, adding that potential defence witnesses were also too frightened to testify.

Asked about Skrzypski’s case, Teuku Faizasyah, spokesperson for the Indonesian Foreign Ministry, told Al Jazeera that the ministry acted based on the notes and provided reply “when needed”.

Regarding the requested transfer, Teuku said it was only possible when all the legal options are exhausted and the court decision has come into force.

“His rights have also been fulfilled and facilitated in respect of process law,” he added but did not comment on the security problems in Papua.

The Ministry of Law and Human Rights has not responded to Al Jazeera’s queries.

Authorities in Wamena have promised to provide the needed medical attention, but Febiana Wilma Sorbu, one of the prosecutors in charge of the case, refused to answer Al Jazeera’s questions on the conditions Skrzypski is being kept.

Andreas Harsono, Indonesia researcher at the Human Rights Watch, said he has no doubt that the treatment of Skrzypski violates human rights under the international and Indonesian law.

“Jakub Skrzypski has been unfortunately entangled in Indonesia’s paranoid bureaucracy.

“The longer his imprisonment continues, the more Indonesian machinery is making him to document the rotten prison cells, something that indigenous Papuans are very familiar with,” Harsono said.

After the Papua High Court upheld the sentence in July, Skrzypski’s advocates appealed the case before the Supreme Court, asking to acquit him of all the charges.

‘illegitimate’ Trump only president because of Russian meddling