Puerto Rico’s Governor Ricardo Rossello announced on Sunday that he will not seek re-election next year after more than a week of protests demanding his resignation following the release of compromising chats. 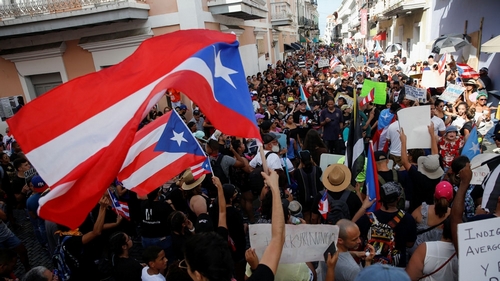 Governor Ricardo Rossello, who advocates statehood for the US territory of Puerto Rico, had said in March that he would seek re-election Marco Bello/Reuters

“I have listened, and I am listening to you today,” Rossello said in a video posted on Facebook. “I have made mistakes and I have apologised.”

“I admit that apologising is not enough. In this case, I announce that I will not seek re-election as governor next year,” he said, adding that he will also leave the presidency of the New Progressive Party.

The politician, who advocates statehood for the US territory of Puerto Rico, had said in March that he would seek re-election.

Protests erupted in Puerto Rico last week after the leak of hundreds of pages of text chats on the encrypted messaging app Telegram in which Rossello and 11 other male administration members criticise officials, politicians and journalists.

In another, a mocking comment is made about bodies piled up in the morgue after Hurricane Maria, which left nearly 3,000 dead.

Police fired tear gas at the crowd on Monday after a fire broke out near the government headquarters. Five protesters were arrested.

Local celebrity performers such as rapper Benito Martinez (“Bad Bunny”), pop icon Martin and Rene Perez (“Residente”) urged their fellow Puerto Ricans to turn out on Wednesday for a demonstration that drew thousands of people.