The battle between rival groups for the Libyan capital has killed more than 1,000 people since it began in April, the United Nations said, a grim milestone in a stalemated conflict partly fuelled by regional powers. 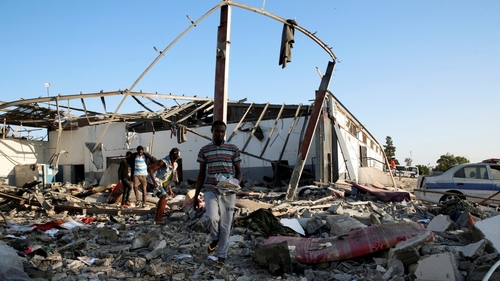 The World Health Organization (WHO) said in a brief statement on Tuesday that 1,048 people, including 106 civilians, have been killed since the offensive began. It said 5,558 were wounded, including 289 civilians.

“WHO continues to send doctors and medical supplies to help hospitals cope. Our teams have performed more than 1,700 surgeries in three months,” the UN body said on Twitter.

Forces loyal to Khalifa Haftar, a renegade military commander, launched an offensive on Tripoli in early April, advancing on the city’s southern outskirts to wrestle the capital from forces loyal to the UN-recognised Government of National Accord (GNA).

As the #Tripoli crisis enters its fourth month, the toll is 1048 dead, including 106 civilians, and 5558 injured, including 289 civilians.

WHO continues to send doctors and medical supplies to help hospitals cope. Our teams have performed more than 1700 surgeries in 3 months.

Haftar’s Libyan National Army (LNA), which holds eastern Libya and much of the country’s south, enjoys the support of Egypt, the United Arab Emirates, and Russia.

But it has faced stiff resistance from fighters aligned with the UN-recognised government, which is aided by Turkey and Qatar.

The battle lines have changed little since the offensive began, with both sides dug in and shelling one another in the southern reaches of the capital.

Forces aligned with the GNA recently recaptured Gharyan, a town 100km west of Tripoli, which is on a major supply route.

Thousands of African migrants captured by Libyan forces funded and trained by the European Union are trapped in detention centres near the front lines.

An air raid on one facility last week killed more than 50 people, mainly migrants held in a hangar that collapsed on top of them.

Libya slid into chaos after the 2011 NATO-backed uprising that toppled and killed long-ruling dictator Moammar Gaddafi.

Armed groups have proliferated and the country emerged as a major transit point for refugees and migrants fleeing war and poverty for a better life in Europe.

Haftar’s supporters say he is the only leader who can end militia rule, reunite the oil-rich country, and keep it from being a safe haven for “terrorists”.

But his critics see him as an aspiring strongman, and his offensive appears to have at least temporarily united western Libya’s fractious forces in opposition to a return of one-man rule.

On Friday, the UN Security Council called on the warring parties to commit to a ceasefire and seek a political solution following the air attack on the migrant detention centre.

The west thinks Putin is Russia’s spymaster. But are the spies controlling him?