China has lodged an official protest with the UK, accusing Foreign Secretary Jeremy Hunt of “fantasising in the faded glory of British colonialism” after his comments about Hong Kong. 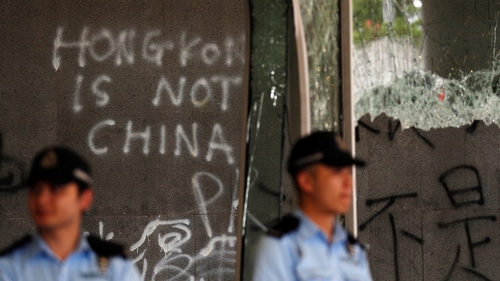 It was the second day in a row Beijing has hit back at Hunt for remarks he made about the unprecedented anti-Beijing protests that have rocked the former British colony.

While recognising that Hong Kong is part of China, on Tuesday Hunt warned of “serious consequences” if Beijing breaches the “legally binding agreement”.

The comments infuriated Beijing, which had already scolded Hunt for a “gross interference” when he voiced support for the protesters.

“He seems to be fantasising in the faded glory of British colonialism and in the bad habit of gesticulating while looking down on other countries’ affairs,” said foreign ministry spokesperson Geng Shuang at a regular briefing.

“I need to re-emphasise that Hong Kong has now returned to its motherland,” said Geng. “The rights and obligations returned to the British side under the declaration have all been fully implemented. The UK at every turn considers itself as a guardian which is nothing but a delusion.

“I want to ask Mr Hunt… during British colonial period, was there any democracy to speak of in Hong Kong?”

In response, the UK government summoned China’s ambassador for a dressing-down on Wednesday.

Under the terms of the 1997 handover deal from British to Chinese rule, which established a “one country, two systems” framework, Hong Kong enjoys rights and liberties unseen in mainland China.

Protesters have accused Beijing of reneging on that deal with the help of unelected leaders.

Liu also accused Hunt of interfering in Hong Kong’s affairs and supporting “violent lawbreakers”, saying at a rare press briefing in London on Wednesday that the UK should “show respect” and keep its “hands off” the semi-autonomous territory.

Apparently unfazed by Liu’s remarks, Hunt – who is currently campaigning to become the UK’s next prime minister – reiterated his criticism in a Twitter post following the briefing, saying:

“Message to Chinese govt: good relations between countries are based on mutual respect and honouring the legally binding agreements between them. That is the best way to preserve the great relationship between the UK and China”.

Message to Chinese govt: good relations between countries are based on mutual respect and honouring the legally binding agreements between them. That is the best way to preserve the great relationship between the UK and China

Demonstrations erupted last month over a controversial extradition bill that would allow suspects to be extradited to mainland China for trial, prompting fears that, if passed, the legislation could be used to target Beijing’s political opponents.

The protests reached their peak on Monday, when demonstrators stormed the city’s legislature, smashing windows, leaving anti-Beijing messages on walls such as “Hong Kong is not China” and briefly hanging the territory’s colonial-era flag.

Police in Hong Kong said they arrested 12 people in connection with the incidents on July 1, although it was unclear if those arrested were among the protesters who smashed their way into the legislature building.

Eleven men and one woman were taken into custody over a “violent incident”, the police said.

The police said they had also arrested six people linked to incidents the day before and eight others suspected of being involved in the illegal online disclosure of police officers’ private information.

Trump is turning US July 4th celebration into a ‘political rally’