Erik Norland, an executive director and senior economist at U.S. derivatives exchange operator CME Group, published an article theorizing that the rising cost of bitcoin transactions could be an early indicator of an impending bitcoin price crash.

A CME Group economist believes that rising transaction costs could cause a bitcoin price crash.

At present, miners earn just nine percent of their revenue from transaction fees; the remainder is subsidized through the block reward. This is why the average transaction fee is so much smaller than the transaction cost – although many users still protest that fees are too high.

Norland notes that in both 2010 and 2013, the average transaction cost spiked just prior to severe price corrections, perhaps indicating that bitcoin had become overbought relative to its actually network utility. In 2010, the cost per transaction reached parity with the bitcoin price, which was then valued at approximately $30. In 2013, bitcoin soared to near $1,000 prior to the collapse of bitcoin exchange Mt. Gox, and the transaction cost rose as high as $80. 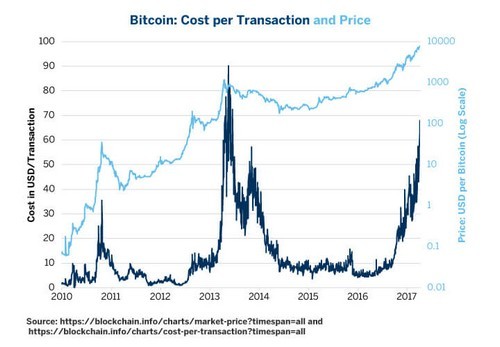 The present bull market has raised the cost per transaction to about $74, according to data from Blockchain.info, a factor which Norland says is “ominous” for bitcoin and could “portend another correction”.

“With the price of bitcoin now around $10,000 as of this writing, could the market sustain transaction costs of $80, $100 or more without demand and prices collapsing?” he asks. “The answer to this question is not known at the moment, but we will likely find out at some point in 2018 or 2019.”

Of course, Norland’s research does not account for the fact that bitcoin, to some extent, is used differently than it was in 2010 and 2013. Over the years, users have come to view bitcoin as a store of value – a sort of “digital gold”. This factor, coupled with rising fees (relative to their USD equivalent, that is), has caused a far smaller percentage of users to make regular, small-value transactions. Consequently, comparing present transaction costs to data from 2010 and 2013 may not be an apples-to-apples comparison.

In what cities of Russia spend the most money to charity

Hunt master tells protester he wants to ‘s**g her’