“Of course we don’t condone any violence,” politician Claudia Mo said outside government headquarters on Tuesday.

Hong Kong, China – Pro-democracy politicians appealed for understanding after protesters attacked the legislature building, vandalised and occupied it as police retreated in extraordinary scenes of violence in the Chinese territory.

“But we hope everyone, not just in Hong Kong, but in the whole wide world, will try to understand the Hong Kong young people’s desperation exhibited behind the so-called violent acts.”

“It’s a tragic episode of the movement,” he told Al Jazeera.

“What the young people did yesterday inside the chamber council actually reveals an inconvenient truth to the whole world: that why Hong Kong citizens were so disrespectful to our own legislature is because it cannot represent us. So it signifies clearly the reasons we need democracy.”

On Monday – the 22nd anniversary of the city’s handover from the United Kingdom to China – protesters stormed the government complex, smashing windows, spray-painting graffiti in the inner chamber, and defacing portraits of unpopular Hong Kong leaders.

Protesters occupied the building for several hours until riot police emerged in force about midnight and fired tear gas to clear the streets. They then quickly retreated from the ransacked building.

Massive demonstrations, sometimes involving more than one million people, began in response to a proposed extradition law that would see criminal suspects sent to mainland China.

Opponents say the law could be used against critics of the pro-Beijing government in the semi-autonomous territory.

“This violence and lawlessness have seriously affected the core values of Hong Kong’s legal system,” Lam told reporters at 4am (20:00 GMT) local time.

“I feel very indignant and saddened by this and want to strongly condemn it. I believe that the public feels the same.”

Lam suspended the extradition proposal last month and has indicated it would not be revived. But demonstrators insist she scraps it entirely and they are also now demanding her resignation. 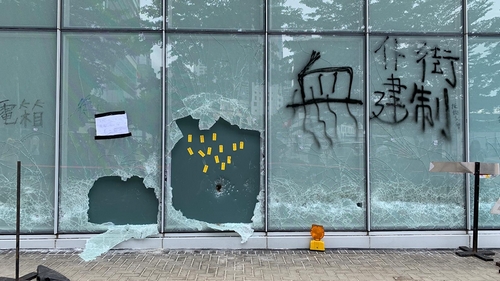 The break-in marked a significant escalation on an otherwise peaceful day that drew an estimated 550,000 people to march in the streets to protest against the extradition bill.

Monday night’s raid has raised concerns the actions of a small faction could hamper the momentum of a democratic movement that has drawn millions to the streets in recent weeks calling for the full withdrawal of the bill.

“Carrie Lam is trying to turn the tables and trying to shift public opinion focusing on our young offenders, that they are to blame,” said Mo. 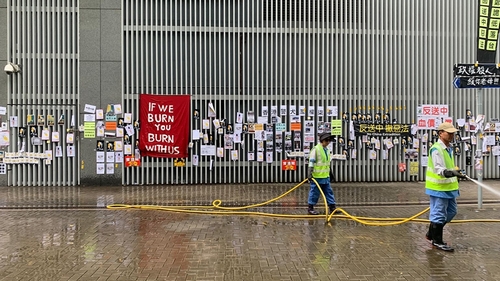 When Hong Kong, a former British colony, was returned to China in 1997, it became a semi-autonomous region and inherited a framework called “one country, two systems”, which guarantees protection of its civil liberties, freedom of speech, and rule of law.

But Hong Kong’s autonomy has increasingly come under threat over the years, giving rise most notably to the Occupy Movement in 2014, when students brought the city to a standstill for two-and-half months, calling for the right to directly elect Hong Kong officials.

Monday’s break-in could have a “dampening effect on the democracy movement”, said Sunny Lo, a veteran Hong Kong political commentator. He added the attack “deeply divided” protesters into two main groups: a non-violent majority and a violent minority.

“The problem in Hong Kong is hyper-politicisation because the escalation of political conflict went from verbal to physical destruction,” Lo said.

“The political wounds coming from this violent event will have to be healed for at least some time. Protests will die down a little bit.”

Some pro-democracy leaders do not agree, however. But they are also unsure of what comes next.

“It’s a difficult question, I don’t know,” Chu said. “But clearly the strategy used by the government is not going to pacify society. So more action can be expected, but we don’t want any more destructive actions.

“Even though I think Monday’s violence would be a setback on public opinion, people may question the way forward. But I believe that we can recover soon from this,” Chu added.

“I’m sure you would have seen messages online that some are quite willing, they claim, to die for this democracy fight,” Mo said. “We need to remind them – it’s not worth it.”

Prominent activist Joshua Wong reminded critics of Monday’s unprecedented events that a battle for democratic freedom was under way.

“I hope people are aware that lawmakers in Hong Kong are not all democratically elected,” Wong told Al Jazeera. “Instead of criticism or blame on the protesters, they should have more understanding on the crackdown on human rights and that we have not achieved our goal.”