It’s an admission that would see many of us end up in the dog house.

Chris Packham has confessed that his pet pooch means more to him than his other half.

The Springwatch presenter, who has been in a relationship with zoo owner Charlotte Corney for 10 years, said 14-year-old poodle Scratchy was the ‘most important creature’ in his life.

The 56-year-old, who was diagnosed with Asperger’s in 2005, said that the condition meant his love for pets ‘knows no bounds’.

The naturalist told Radio Times: ‘Scratchy is the most important creature in my life. He’s dependent on me; Charlotte isn’t.

‘I’ve always had a problem with needing to be loved by other people.

‘My love for Scratchy and Charlotte is different, but of equal gravity, and that gravity is the problem.

‘Humans find it crushing. Animals benefit because my devotion is profound. Also humans consistently fail one another, whereas Scratchy never, ever fails me.’

Scratchy’s twin, called Itchy, died last year and Packham has had the poodle’s body kept in cold storage in a barn beside his cottage.

The presenter, whose BBC2 documentary about Asperger’s will be shown next Tuesday, says that he wants his ashes to be mixed with his pet poodles’.

Talking about the ‘romantic plan’, he said: ‘After I die I’ll also be cremated, and we’ll all be mixed together and chucked out in the woods.

Mr Packham, 52, has been with his girlfriend Charlotte Corney for 10 years, but says Scratchy is ‘dependent on him, she isn’t. He was diagnosed with Asperger’s syndrome in 2005

Then the three of us can become something joyous in the place we’ve loved so greatly. You must see it.’

He described his remaining time with Scratchy as ‘the interval between disasters’ after Itchy’s death left him suicidal.

Miss Corney, who met Packham when he visited her zoo on the Isle of Wight, said that she was ‘certain’ of her partner’s love for her.

The 41-year-old said: ‘Chris and I have talked about how he’ll feel when Scratchy dies. 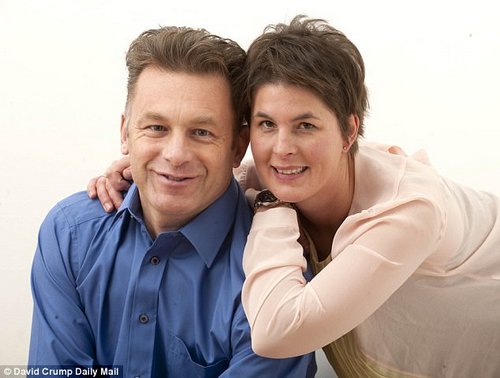 Mr Packham and his partner zoo owner Charlotte Corney. She says ‘His truthfulness sometimes hurt me, but it’s part of the Asperger’s

‘I was impressed how he survived Itchy’s death. It was less destructive than I feared.

‘He coped by pouring everything into Scratchy. But he will have nothing left to love when Scratchy goes.

‘I don’t compare his love for Scratchy to his love for me. I am more physically affectionate to him than he is to me, but it’s fine.

‘Sometimes I think it would be great to be with someone more normal – he can seem so alien as to be extraterrestrial – but I know I couldn’t live with that.

‘As our relationship progressed, I noticed he didn’t always seem to care how I felt. His truthfulness sometimes hurt me.

London killer who stabbed lover to death jailed for life