It became the most expensive TV drama in history with a rumored $100m (£76.1m) budget from Netflix.

But the creators of The Crown have revealed that it was not the money that led them to go with the online streaming service, but the fact that working with the BBC would have involved ‘oversight’ from the Palace.

The programme’s head of research, Annie Sulzburger, said that Netflix enabled them to create the show completely independently from the gaze of the royal family – which would been impossible had they gone with the BBC.

She said: ‘The Palace, we were completely separate from them. We alerted them that we were writing the show but from that point on we had nothing to do with them.

‘That’s part of the reason we chose Netflix in the end, because the BBC would have involved some oversight.’

The Crown’s head of research Annie Sulzburger has revealed creators chose Netflix over the BBC because of the ‘Palace oversight’ that would have been involved in working with the corporation. Pictured is Claire Foy as Queen Elizabeth II and Matt Smith Prince Philip

Miss Sulzburger was speaking at the Cheltenham Literary Festival alongside the show’s director Philip Martin, who said Netflix ‘left us alone’ and were ‘very respectful’.

Historian Robert Lacey, who wrote The Crown: The Inside History, said another appeal was that they could make the episodes as long as they wanted with Netflix.

He said: ‘I remember Peter Morgan (the show’s creator) talking to me the day after the Netflix offer had come in, and it was a big offer, but what appealed to him was that he’d been toying with… well he’d been saying that: ‘The BBC is 59 minutes and we have to worry about the BBC all the time.

‘We’ll have more freedom if we go to ITV but then that’s only 47 minutes and it has to be written with the commercial breaks.’

It was originally thought the creators went with the American streaming service because the BBC could not afford the rumoured $100million production costs.

Although it is not clear how many people watched the programme, Netflix has 104million subscribers – including 6.1million from the UK.

Miss Sulzburger also explained how they ran into difficulties with Winston Churchill’s estate when writing the script. 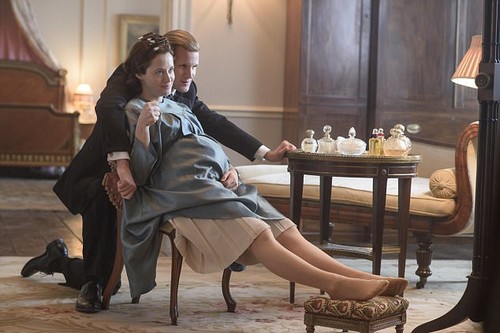 Churchill, who is played by John Lithgow in the programme, did not read any of the former Prime Minister’s real speeches in the programme because of the estate’s demands.

Miss Sulzberger said: ‘The Churchill estate refused to give us any permission to use any of his words without reading every single word that we’d written for every single script regardless of whether or not he was in them.

‘So we just decided that it was an inappropriate relationship to have and we would just go ahead and rewrite.

‘Even things like the King’s eulogy (that Churchill composed for the death of George VI) we had to rewrite, which you think would be publicly owned.’

The Crown has become the most expensive TV show in history, with a $100m budget. The rumours were the BBC couldn’t afford it, but the real issue was ‘Palace oversight’. Pictured is Michael C. Hall as John F. Kennedy

Series one of The Crown, which stars Claire Foy as the Queen and Matt Smith as Prince Philip, looked at the royal family from 1947 to 1955.

But, as the programme starts to cover more recent history including the life of Princess Diana, Miss Sulzberger said that it will be difficult to decide what to include as gossip becomes more prevalent.

Speaking about choosing whether to believe sources, she said: ‘With Diana it’s going to be harder.

I’m actually hiring researchers who have not lived through the Diana years intentionally because I don’t want them to come in with any of that sensibility about them.

‘That they remember when he cheater or she cheated or any of the stories, her going on the BBC and talking about the marriage – it’s a clean slate for us.’