Madrid, Spain – Greta Thunberg marked her arrival at the COP25 Conference on Climate Change on Friday with a strongly word plea for it “to lead to something concrete, an increase in awareness, and for people in power to grasp the urgency of the climate crisis – because right now it doesn’t seem like they are”. 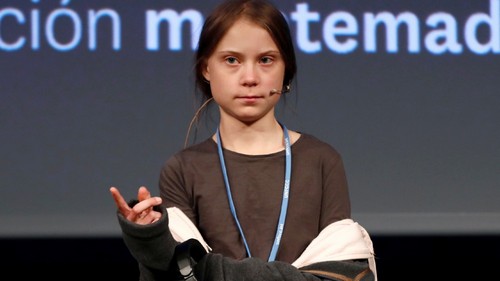 Speaking in a news conference at the appropriately named “Casa Encendida” (Burning House) cultural centre in Madrid’s vibrant, multicultural inner-city Lavapies district, the teenage Swedish activist – who has often described the climate crisis as “our house being on fire” – said “someone like me is a small part of a very big movement, we need more climate activists, we don’t need to listen to me before anyone else.”

With her, sat on stools, were three other young Fridays For Future activists. One was from Chile. When asked about the social problems there, Thunberg replied, “it is very important we include environmental justice when we speak of social justice – climate justice is the base.”

“Some people are afraid of change and change is what we young people are bringing – and that is why they are trying to silence us.”

What message does she have for world leaders like President Donald Trump? “To those who are not here – we cannot afford any more days going by without real action being taken. We should not look past it and ignore things.”

As for the effectiveness of young activists, she argued, “We would love some action from the people in power; people are dying and suffering because of the ecological and climate emergency and we cannot wait any longer.”

Having arrived in Lisbon on Thursday morning, Thunberg attended what is set to be the largest outdoor demonstration of COP25 on Friday evening in Madrid city centre, where more than 850 ecological organisations and their supporters will march under the slogan “The world has woken up to the climate emergency.”

Tens of thousands of demonstrators, many not from Spain, flocked to the central Paseo de la Castellana for a colourful and noisy three-hour protest across the city centre, bearing banners in multiple languages, some saying “Climate Change Kills”, others “Tomorrow Will Be Too Late”, or “We Fight For Life”.

“We’re doing this for our grandchildren,” added Nico, at the other end of the banner.

“It’s an important subject and I want to support it,” Annick, a German woman who travelled from Tarragona in Catalonia for the demonstration, told Al Jazeera. “And Greta is doing an amazing job.”

Thunberg needed to abandon the demonstration after police said that too many members of the public and media were blocking her way, but she returned to make a final speech at the end of the protest. Other speakers included actor Javier Bardem.

Thunberg was in Los Angeles, en route to Chile, when she heard COP25 had been relocated to Madrid. Her subsequent journey to the Spanish capital lasted 36 days, travelling by catamaran across the Atlantic, as well as by train and electric car.

Having reached Madrid’s Chamartin railway station on Friday morning – carrying her now-famous “Skolstrejk for Klimatet” – school strike for the climate – placard, she briefly visited the Madrid trade fair centre, IFEMA, where COP25 is based, meeting young activists in a protest outside the main building.

In the afternoon, while using a side-entrance to the Casa Encendida building, Thunberg was greeted with cheers and applause from a group of some 50 supporters and wellwishers – including one dressed as a clown.

“We have raised public awareness and that’s a big step in the right direction. But it’s nowhere near enough,” Thunberg warned.

“CO2 emissions are increasing, not decreasing. So, of course, there is no victory, the only thing we want to see is real action. We have achieved a lot but if you look at it from a certain point of view we have achieved nothing.”

“She’s very direct and she represents the youth of the world as that figurehead,” he added.

“It’s sorely needed. For years, younger people have felt their voice hasn’t been heard, and they need somebody who’s willing to do that. There were a swarm of people around her when she visited COP this morning – she’s only 16, and that’s really intimidating for someone her age. But she’s been so bold and brave about delivering her message it’s hard not to be motivated to follow her.”

Flavio Aragozini is an environmental activist from Rome who attended the march on Friday evening.

“I already saw Greta when she came to Rome for the second global strike in May last year, and I heard her talking there,” he told Al Jazeera outside the Casa Encendida.

“I knew about environment questions before Fridays for Future, but she’s made a lot of young kids realise how bad the problem is. In my own country, Venice has been seriously flooded five times, more than in the past 100 years.”

As for whether the COP25 conference or the demonstration in Madrid’s streets was more important,  Aragonzini concluded, “They have to work together.”

“By being in the streets we are giving the politicians in COP sitting behind their police lines the message that they need to do something and we are not going to play along with them any more.”