Tributes are being paid to three graffiti artists killed by a train in south London, while a local Conservative party chairman faces calls for his expulsion after describing them as “common scum”.

Police have informed the families of the three men, aged 19, 23 and 23, who were killed by a freight train near Loughborough Junction station on Monday morning.

The street art community has identified the men only by the tags they used as Kbag, Trip and Lover. 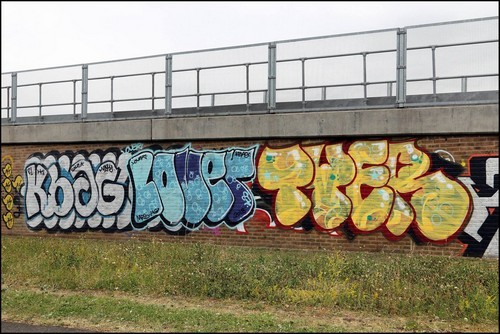 A spokesman for the British Transport Police said the tags circulating were part of its investigation.

In a statement the force added: “Efforts are still under way to establish the circumstances of how the men came to be on the tracks.”

The ukfrontline Instagram page, an online forum for graffiti artists in the UK, has set up a tribute page for themen. It included what is purported to be a photograph of Trip, one of the identified graffiti artists, as he mounted a fence.

The forum also rounded on Brian Cooke, the former mayor of Bromley and a former board member of Transport for London, who took issue with the BBC for describing the men as “graffiti artists”.

Cooke described the men on his Twitter account as “common scum and criminals who cost the railways millions and keep fares high”. 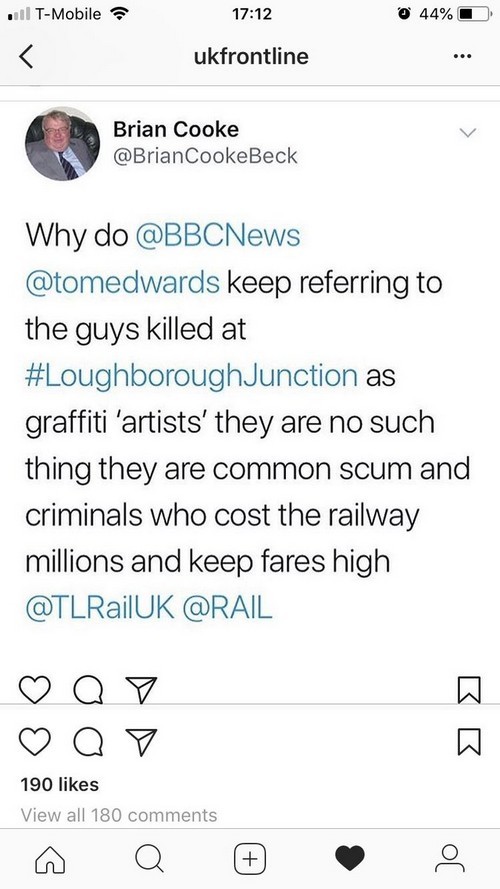 @BrianCookeBeck if this is really your words – this is part why they call the @Conservatives the #nastyparty pic.twitter.com/yFftl2SHPP

Cooke was suspended last month as chairman of Beckenham Conservative Association for using obscene language against the Liberal Democrat former mayor of Bromley Ian Payne, and calling him a “shameful excuse for a Christian human being” during a spat on Twitter.

Sam Webber, the Lib Dem candidate for Bromley and Chislehurst at the last general election, said: “He certainly shouldn’t be saying things like this about a very sensitive and tragic incident.

“After being suspended by the Conservatives you would think he would know better than going on Twitter and ranting about this incident.”

“They should take further action. It’s outrageous,” she added. “He should be thrown out of the party, the guy shouldn’t be involved in politics at any level.”

Marc Vallée, who spent a year documenting a London graffiti crew, agreed, saying: “His comments are callous and insensitive especially at this very early stage, and especially from a former TfL board member.

“I would hope that if he is still a member of the Conservative party that the transport secretary and others would say that he has brought his party into disrepute and expel him.”

Windrush victims ‘should be compensated’ for psychological impact