La Paz, Bolivia – Two people were killed on Wednesday in clashes between Bolivian police and supporters of former president Evo Morales, as the interim government of Jeanine Anez struggled to contain the political unrest sweeping the South American country.

A supporter of Evo Morales holding a Wiphala flag during a protest in La Paz, Bolivia Carlos Garcia Rawlins/Reuters

The violence came after supporters of Morales launched a campaign that included marches, roadblocks and legislative manoeuvres in an effort to reinstate the left-wing leader to power.

Anez declared herself interim president on Tuesday after Morales and others in his government resigned following weeks of unrest over the country’s disputed October 20 presidential election. The resignation came after an audit by the Organization of American States found irregularities during the vote. Morales then fled to Mexico after receiving asylum.

Anez promised that her government would only last a few months, and said that her main goals was to “pacify” the country and hold elections. She has not announced a new date for election, but under the Bolivian constitution new elections must be held within 90 days of her taking office. 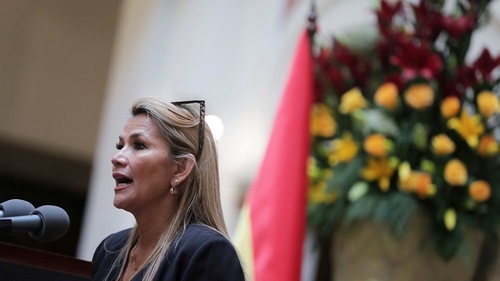 “These upcoming months will be fundamental in returning peace, democracy and freedom to our people,” she said after swearing in her new cabinet.

‘MAS and Anez must negotiate’

Anez was formerly the second vice president of Bolivia’s senate and represents a small conservative party whose presidential candidate came in fourth place in the last election, receiving less than five percent of the vote.

She assumed the interim presidency after four officials in the line of succession and Morales loyalists, resigned from their posts, including Bolivia’s vice president, the head of Congress and the head of the country’s senate.

Legislators from Morales’s Movement Towards Socialism party (MAS), who hold a majority in Bolivia’s congress boycotted the congressional session she called to formalise her claim.

She has won the backing of Bolivia’s Constitutional Court and some governments, including the United States, Brazil and the United Kingdom. 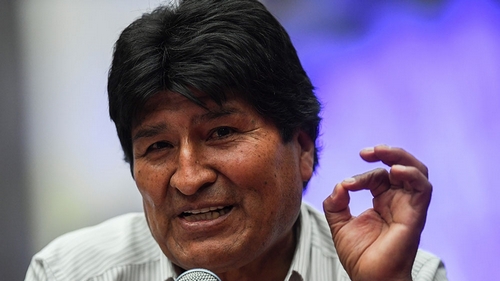 Morales, who once enjoyed overwhelming popularity, alienated some when he insisted on seeking a controversial fourth term.

From exile in Mexico on Wednesday, Morales said that he supports a “national dialogue” in which all parties participate, and is willing to return to Bolivia to be part of those talks if that helps to “pacify the country”. He maintains he was a victim of a coup.

Morales told the Spanish newspaper El Pais that until his resignation has been approved by the legislature, he was still president.

On Thursday, Anez said that Morales will not be able to take part in upcoming elections because under the constitution, he is barred from running for a fourth consecutive term.

Addressing a news conference, she added that Morales’s vice president, Alvaro Garcia, would also not be allowed to run.

“There are people in her coalition who want to see MAS barred from the next election” Julio Aliaga, a Bolivian political analyst said.

“But that would be a big mistake. If that happens we are facing an endless rebellion, that could lead to civil war,” Aliaga told Al Jazeera, adding that the “only way to fix this situation” is for MAS and Anez’s government to sit down and negotiate. “Until that happens it will be hard to calm down the unrest on the streets.”

‘On the streets until Evo returns’

Morales supporters marched through La Paz, Cochabamba and several other cities to denounce Anez on Wednesday.

“This woman does not represent us,” said Rolando Balboa, a teacher from El Alto, a sprawling working-class area that is perched above the capital city of La Paz.

“Evo was a good man who built roads and gave homes to the poor, and they have forced him to resign,” Balboa told Al Jazeera.

Protesters said they were outraged by recent incidents in which they said police burned the Wiphala flag and tore it off their shoulder patches after Morales was removed. The checkered, rainbow-coloured flag is an indigenous symbol that was placed on all government buildings, and stitched on police uniforms along with the national flag after Morales became president.

“They are racists, who do not respect indigenous people,” said Sabina Paz, a street vendor from El Alto who attended the protest.

Paz said her mother relies on a monthly subsidy of about $50 that Morales created for elderly people from poor and rural areas. She feared that Bolivia’s new government would now revoke her benefit.

“We will be on the streets until Evo returns,” she said. 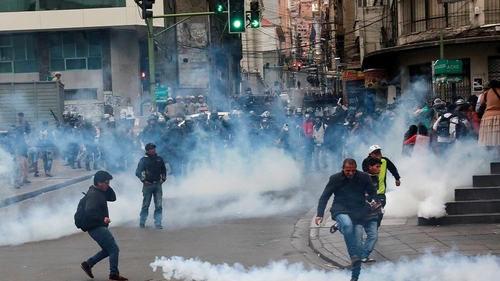 Meanwhile, protests in the eastern province of Santa Cruz were markedly more violent.

The director of Bolivia’s Institute for Forensic Science, Andres Flores said that in the town of Yapacani a man died from a bullet wound to his stomach on Wednesday. In nearby Montero, a teenager died from injuries to his skull after being beaten. It remains unclear who was responsible for the killings.

Flores said up to 10 people have been killed so far since political turmoil broke out in Bolivia following the elections.

Hong Kong gears up for new protests over extradition bill