According to the US president, the ISIL chief died after running into a tunnel in the village of Barisha where he detonated an explosive vest, killing himself and three of his children.

Islamic State of Iraq and the Levant (ISIL or ISIS) leader Abu Bakr al-Baghdadi was killed in a US military raid in northwest Syria, President Donald Trump confirmed.

During a press conference on Sunday, Trump said al-Baghdadi had been “under surveillance for a couple of weeks”.

In the announcement, Trump thanked Turkey, Syria, Iraq, Russia and the Syrian Kurds for their cooperation.

World reaction to the news has been divided with some leaders hailing it as a turning point in the fight against “terrorism” while some governments played down its down significance.

Having paid the dearest price in the fight against Daesh, PKK/YPG, and other terrorist organizations, Turkey welcomes this development.

I am confident that a decisive struggle against terrorism, in line with the spirit of alliance, will bring peace to all of humanity.

The Russian defence ministry reacted to the news with scepticism, saying “it had no reliable information on the US operation.”

“The Russian Ministry of Defense does not have reliable information on the US servicemen conducting in the Turkish-controlled part of the de-escalation zone of Idlib an operation on yet another ‘elimination’ of the former IS leader Abu Bakr al-Baghdadi,” Major-General Igor Konashenkov was quoted by local news agency RIA as saying.

Afghanistan welcomed al-Baghdadi’s killing as a major blow to the armed group that is expected to weaken the South Asian branch.

The emergence of an Afghan ISIL affiliate in recent years created another enemy for the country’s US-backed government, which has been fighting against the much larger Taliban insurgency since 2001.

“The Afghan government strongly welcomes the US forces’ operation that led to the death of… Baghdadi,” a spokesman for Afghan President Ashraf Ghani said in a post on Twitter. “The death… is the biggest blow to this group and to terrorism,” the spokesman, Sediq Sediqqi, said.

“This reflects our shared determination, of the United States of America and of all free countries, to fight terror organisations and terrorist states,” a statement from his office read.

“This achievement is an important milestone, but the campaign is still ahead of us,” it added.

Iran’s information minister, Mohammed Javad Azari-Jahromi said in a tweet that the killing of al-Baghdadi was “not a big deal. You just killed your creature”. The minister did not elaborate, but Iran has often accused the US of creating ISIL, without providing evidence.

Not a big deal! You just killed your creature. https://t.co/jrPuLWh5Sm

Bahrain Foreign Minister Khalid bin Ahmed Al Khalifa praised the move and said it was a “fatal blow to the group.”

Translation: “The killing of the criminal Abu Bakr al-Baghdadi is a severe blow to the ISIL terrorist organisation. We salute our brothers and allies on their efforts and success in finding him and getting rid of him.”

French Defence Minister Florence Parly congratulated the US but cautioned that the fight against ISIL will continue.

Translation: “Baghdadi: Early retirement for a terrorist, but not for his organisation. We will continue the fight against Daesh ISIL without rest, with our partners, adapting ourselves to new regional circumstances.”

“I congratulate our American allies for this operation. My thoughts today are for all the victims of the madness of Baghdadi and the criminals who have followed him.”

UK Prime Minister Boris Johnson said this was “an important moment,” but also warned the battle against ISIL “is not yet over.”

The death of Baghdadi is an important moment in our fight against terror but the battle against the evil of Daesh is not yet over.

We will work with our coalition partners to bring an end to the murderous, barbaric activities of Daesh once and for all.

Speaking at a news conference  in Tokyo, Japan’s Chief Cabinet Secretary Yoshihide Suga said the “fight against extremism is not over.”

He reiterated Japan’s commitment to the fight against the spread of extremism around the world.

Australia’s Prime Minister Scott Morrison welcomed the news of al-Baghdadi’s death, describing his killing as “significant” in the fight against extremism.

“We are mindful though that the threat continues and we must remain ever vigilant and we will continue to be so ever vigilant working with our partners around the world,” the prime minister said.

The commander of the Kurdish-led Syrian Democratic Forces (SDF) Mazloum Abdi said this achievement was a result of  “joint intel cooperation.”

For five months there has been joint intel cooperation on the ground and accurate monitoring, until we achieved a joint operation to kill Abu Bakir al-Bagdadi.

Thanks to everybody who participate in this great mission.@realDonaldTrump#SDF#USArmy #Rojava #Baghdadi 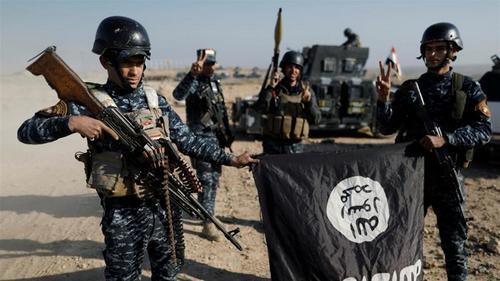 What happened to ISIL? An UpFront special