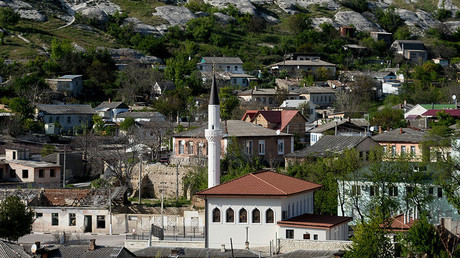 Presenting Russia as a boogeyman crushing an oppressed minority serves the ideological interests of the West and is part of an established pattern of Western behavior, independent political analyst Dan Glazebrook told RT.

Some media outlets are accusing Russia of trying to erase Crimean Tatar culture after authorities moved to repair the crumbling Big Khan Mosque, which is one of the largest on the peninsula and part of the Khan Palace.

The remarkable example of Crimean Tatar palace architecture is the subject of numerous works by Russian writers, musicians and poets.

RT: Why have media outlets described the reconstruction of a crumbling mosque as Russia erasing Crimean Tatar culture? 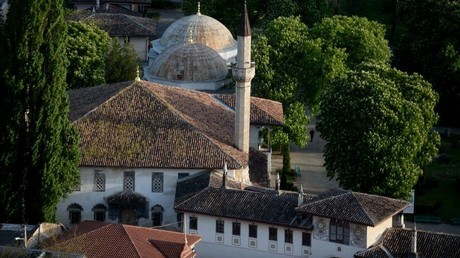 Dan Glazebrook: The West has this tendency to scan the globe in search of any ethnic tensions – real or imagined – that it can leverage to serve its own agenda. This is clearly what is happening here. This happens for two main reasons. One, if there is a conflict which can be presented as an evil boogeyman like Russia crushing an oppressed minority or nation. It does two things. One, it serves the ideological interests of the West because it allows the West to present itself as the antithesis of whatever this demonized enemy boogeyman is. In this case Russia. And secondly, by creating a victim, it allows the West to ride in and portray itself as the savior who is going to save that victim, potentially even through war. We’ve seen this many times. We’ve seen this most clearly perhaps with the 1999 NATO bombing of Yugoslavia which was all justified in the name of saving the Albanians. But every invasion that the West have launched since then has been justified to some degree along the lines of this pathological ‘victim-savior complex.’ Whether it was the invasion of Iraq – which was ostensibly, in some measure, some kind of revenge on behalf of the Kurds of Halabja – or whether it was saving the victims, the people of Benghazi in the 2011 bombing of Libya. So, this is a distinct and established pattern of behavior by the West – to seek out ethnic tensions, to inflame them, exaggerate them, exacerbate them, leverage them to serve their own agenda. And I think the agenda in this case in Crimea is pretty clear. Ukraine and the West want to paint the incorporation of Crimea into Russia, which was legitimized by a referendum, as illegitimate, to delegitimize it, and paint it even genocidal.

To backtrack a little bit, to think about what this issue is about, the Big Khan Mosque. Whenever you get a renovation of a historic monument, there is always going to be grievances and complaints over the way in which it’s done, the manner in which it is carried out. No doubt many of these complaints would be legitimate and no doubt in this case many of the complaints will be legitimate. But that is a far cry from deducing from the existence of such complaints that there is some kind of ethic genocide going on against the Tatars which is exactly what the Ukrainian minister of culture has portrayed this as. I think that interests are very clear: Ukraine and the West seem to demonize Russia, this is an ongoing campaign. And potentially, to portray themselves as the saviors of the Tatars…I don’t think it is going to be used as in a case of Serbia for a war any time soon. But it is all a part of the overall program of delegitimizing, demonizing Russia. That is the overall context, I would say.

RT: Critics say the palace will be lost with this work, but wouldn’t it be lost if the roof fell in?

DG: Yes, of course, this is exactly why these kind of renovations attract controversy, because obviously if you don’t renovate, than there is a danger of the whole structure collapsing and if you do renovate, of course, you are going to have alterations to the historic structure. And that is going in some cases to ruffle feathers and some people may not like the way in which it is done. And inevitably you are going to be ‘tempering’ to some degree with the historical structure of the building. To do nothing could also be potentially one day portrayed as some kind of cultural genocide. Whatever is done, can always be painted and portrayed in a way to make it look devious. The reality is there is no way to preserve history in its entirety without touching it at all, it is just not possible.

Muscovites will be able to check the health of Gorky Park