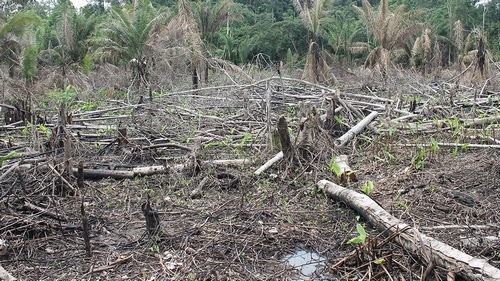 Signed by Para’s Governor Helder Barbalho, the law was published in the state’s official gazette on Tuesday.

“Before, to make a public land claim you had to prove you lived there and farmed there. The new legislation does away with this,” said Brito.

Without these minimum requirements, Brito said, third parties can plant employees on the land for them to occupy it for speculative purposes, which is common in Para.

“Those that invade public land, not with the objective to farm, but to sell it afterwards for profit, stand to benefit,” she said.

Deforestation on the rise

Large-scale colonisation of the state began from the 1970s onward when Brazil’s then-military government encouraged landless families from across the country to migrate to the region. The process was chaotic: many families never received land titles while others abandoned their lands due to harsh conditions and debts.

Predatory land grabbing by powerful criminal groups is an historical problem in the state and involves deforestation to clear land for cattle pasture.

After successive years of decline, Amazon deforestation is on the rise again. Many environmentalists fear far-right President Jair Bolsonaro’s administration is giving carte blanche to loggers and unscrupulous farmers by neutering the power of environmental enforcement agencies.

Deforestation increased by 88 percent in June compared the same month the previous year, with a total loss of 920 square kilometres of forest cover, according to preliminary data from the Brazilian Space Agency

Imazon estimates that up to 21,000sq km of state land could potentially receive private titles under the new law.

In a note, Brazil’s Federal Prosecutors Office said the bill violates “constitutional principles of equality, the social function of property and respect for the environment.”

The prosecutors also criticised the rushed manner in which it was hurried through the local legislative chamber and passed without adequate public debate.

A group of more than 50 signatories, including Greenpeace Brazil, said the law allows criminals to more easily appropriate public lands.

Supporters say the bill is an effort to fast-track thousands of outstanding land claims.

Bruno Kono, president of the Para Land Institute, one of the officials responsible for the bill, told local reporters, “The law establishes the legal conditions necessary for the family farmer and the rural producer to have access to land.”

But Jeremy Campbell, the author of the book, Conjuring Property: Speculation and Environmental Futures in the Brazilian Amazon, said the law would allow for further accumulation by large landowners.

“What we see is that these supposedly populist measures usually benefit local elites and capital,” he said.

Para is Brazil’s deadliest state for land conflict killings with at least seven so far this year.

In March, social movement leader Dilma Silva was killed along with two colleagues by attackers sent by a farmer who wanted the land on which they lived.

“In a state with a long history of land violence like Para, it’s inconceivable that this law could be passed with adequate consultation of civil society,” said Andreia Silverio, a coordinator for Brazil’s rural violence watchdog Pastoral Land Commission in Para.