On Sept. 11, 2001, I was in Moscow to attend an academic conference. That night, on a television at a Russian bar called Uncle Sam’s, I saw the Twin Towers in ruins, smoke rise from the Pentagon, and mayhem engulf New York and Washington.

With U.S.-Russia relations at historic lows and the Kremlin stoking anti-American sentiment, it is hardly surprising that Russians have increasingly negative views of the United States.

But Russian attitudes toward the United States have long belied easy categorization.

Nothing made this as clear as witnessing the Sept. 11 attack from Moscow.

In response to the horror, Russians created an enormous makeshift shrine in front of the U.S. Embassy of flowers, candles, condolence cards, poems, and deeply felt testimonials, many of which were wrapped in cellophane to protect them from the rain. 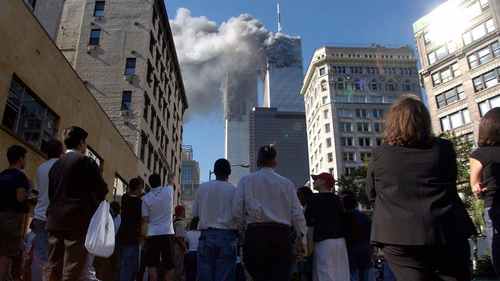 Some tributes referenced Russia’s loss of life from acts of terrorism, including bombs recently detonated in Moscow’s metro and a major shopping mall. Some mentioned the mysterious and contested apartment bombings that shook Moscow in September 1999.

Others noted Russia’s staggering losses in World War II and compared the surprise attack on the World Trade Center to the Nazi invasion of the Soviet Union.

Letters recounted relatives lost at Stalingrad, Leningrad, and the march to Berlin. They urged Americans not to give up hope as this evil would be defeated in the end.

Walking among these remembrances several days after the attack, I cried.  The spontaneous outpouring of grief by the Russian people for the loss of American life brought home to me the full import of the attack.

Several days later I interviewed a high-level official at the Russian Central Bank.

He began working for the government in the Soviet period and was now in his mid-forties.

He was not a Western-oriented liberal and was often critical of Yeltsin, but also appreciated that Russia needed to modernize its banking system and build ties with other market economies.

I had interviewed him a few times about bank policy over the years, and we shared a good rapport. He began by offering sympathies for the attack and the enormous loss of life. He then turned to a long discourse on why the United States and Russia needed to ally as they had done in World War II because, after all, we were both civilized countries.

After a heavy pause, though, he concluded by saying, “Well, you wanted to be the only superpower….”

That Russians expressed a deep empathy mixed with a heavy dose of schadenfreude toward the U.S. following the Sept. 11 attack captures a duality that belies one-dimensional depictions of Russian views of the West.

And this duality continues today. At a time when Russian state officials blame Western machinations for everything from the low scores of Russian rhythmic dancers at the Tokyo Olympics to the ongoing economic stagnation, Russian popular attitudes toward the United States defy the easy depictions so often invoked by commentators.

The Levada Center frequently asks Russians to list which countries are unfriendly toward Russia and roughly 66% say the United States.

When asked what types of relations with the U.S. best serve Russian national interests, a majority support some form of cooperation with the United States and only small minorities prefer policies that risking a confrontation.

Russian attitudes toward the U.S. have responded in reasonable fashion to events and do not reveal an inherent anti-Western bias.

From 1997 to 2013, when relations between the countries were generally favorable, a majority of Russians had a positive view of the United States.

Pro-U.S. views fell sharply following the annexation of Crimea and the introduction of economic sanctions by the US and rose again in subsequent years.

Public opinion does not dictate Russian foreign policy by any stretch.

But commentators and foreign policy makers should care about how Russians view the United States because the Kremlin certainly does.

Putin’s approval ratings have been a critical part of his formula for ruling Russia and Moscow’s relations with Washington have long been a lens through which Russians have evaluated its leaders.

Far from being simply a reflection of manipulation by the Kremlin or an unchangeable cultural reflex ingrained by history, the Russian public’s attitudes toward the U.S. are much more nuanced and malleable.

Russian’s views of the U.S. react to the actions of the leaders of both countries. Even with the current tense state of affairs between Moscow and Washington, many Russians hold positive views of the United States and would like to see better relations, even as they remain skeptical about U.S. power and intentions.

In the wake of the 20th anniversary of the Sept. 11 attacks, commentators, and more importantly, policy makers should bear this in mind.

Why the Kremlin Isn’t Celebrating the Duma Election Results

Will Russia’s Upcoming Duma Elections Change Anything At All?

Who Cares About the Pandora Papers?