The Pandora Papers, a trove of almost 12 million documents, have shined a light on the activities of over 330 politicians and public officials in more than 90 countries and territories. According to the International Consortium of Investigative Journalists, Russian nationals are “disproportionately represented,” accounting for 14% of the more than 27,000 named companies.

Another massive leak, another multi-national investigation, another slew of allegations of everything from outright corruption and money laundering to legal but ethically problematic tax avoidance and financial engineering.

The news is at once dramatic, predictable, and ⁠— alas ⁠— arguably pointless.

This no doubt sounds deeply churlish, an offence to the 600-plus journalists from 150 different news outlets including Russia’s iStories, who dug into the data for two years, connecting the dots and uncovering the faces behind the anonymous offshore shell companies. 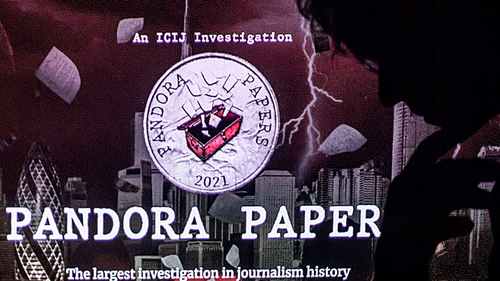 The Papers will, one can hope, provide further impetus for efforts in the West to bring meaningful transparency to what is, for all the ritual declarations of politicians, bankers and regulators, still a financial system that offers numerous opportunities for legal avoidance of tax and scrutiny to those able to afford the right lawyers and accountants.

The way former British prime minister Tony Blair and his wife Cherie sidestepped paying $423,000 property tax by buying a $8,75m building in a posh London neighbourhood through an offshore company based in the British Virgin Islands has certainly provided a new focus for criticism both of the couple, but also this particular legal loophole.

When it comes to Russia, while a cast of the high and the mighty appear, inevitably media attention has focused on anything that can be linked with Putin, notably allegations about the family of a reputed former girlfriend. That reflects Western media obsessions as much as anything else. But does it really matter?

First of all, the news can be mobilised for political purposes in other ways, too. The relatively innocuous discovery that before his election, Ukraine’s President Volodymyr Zelensky moved millions of dollars assets into a network of offshores, in collaboration with his aid Serhiy Shefir and present security service chief Ivan Bakanov has been pounced on with glee not just by his political enemies but also the Russian media. Given his carefully cultivated image as the one honest man in Ukrainian politics, the impression of impropriety ⁠— even if everything he did was legal ⁠— is a problem.

Secondly, the very scale of the revelations dilutes their impact by contributing to the sense ⁠— not entirely inaccurate ⁠— that everyone with power and money is much the same.

That said, Beijing’s magnates and politicians are surprisingly absent, not least given the ample evidence there is of systemic corruption in China. Likewise, there is a dearth of Americans, and the notion that they never abuse financial loopholes does rather stretch credulity.

No wonder that Russian sources also rush to portray this as a strategic leak by the US intelligence community intended to undermine the Kremlin. It has to be said, though, that this would seem to be a rather scattershot and slow-motion attack. Would Washington really also embarrass so many allies in the quest to air some dirty Russian laundry?

In any case, while individuals may be turning to their lawyers and PR consultants, how much real impact will this have? The sorry truth would seem to be that by now no one is either surprised nor mobilized by these kind of revelations.

Do any Russians really presume that these people weren’t fiddling the books? Will it comes as a shock that, for example, Sergei Chemezov, CEO of Russian state defence conglomerate Rostec, has a superyacht registered through an offshore? They are probably more surprised that he does not moor it at a secret Pacific island hideaway populated by genetically-engineered unicorns.

This is not just about the Pandora Papers, although they do seem to demonstrate that more is not always better, it also speaks to a fundamental political challenge facing Team Navalny.

Their ‘He’s not Dimon to you’ video had the virtue of dismantling Dmitry Medvedev’s reputation as being one of the few honest figures in the regime. ‘Putin’s Palace’ was not just their first direct attack on the monarch, it had a voyeuristic “cribs of the rich and famous” dimension. I suspect many watched not for the forensic analysis of the financing but the pole-dance hookah bar.

Where do you, can you, go from there? It is all very well going after Sergei Lavrov, and other boyars, but there is surely a law of diminishing returns. Once there is a general assumption that everyone is a crook and a thief, then further revelations may enthuse your base, but are hardly likely to expand it. As pollsters put it, that is already ‘priced in’ to people’s political decision-making.

A lot of journalists can justly congratulate themselves on some serious work. Hopefully, campaigners will be able to use the latest revelations to push for serious regulatory changes. But for Russia, the likelihood that this is a one-week wonder, at best. Unlike Pandora’s box, there’s unlikely to be Hope at the bottom

Interpreting the Biden Doctrine: The View From Moscow

Should Russia Be Worried by the New AUKUS Alliance?