The German media have dubbed Laschet a Merkel loyalist who will extend her era. Concerns have been expressed, however, about Laschet’s foreign policy views. Back in 2014, Die Welt newspaper included Laschet on the list of Putin-Versteher: Putin-friendly politicians.

At that time, he lamented “anti-Putin populism” and the lack of foreign policy discussions in Germany in an interview with the Frankfurter Allgemeine Zeitung newspaper.

Germany’s ruling party, the Christian Democratic Union (CDU), has chosen a new leader: Armin Laschet, the prime minister of the state of North Rhine-Westphalia. This fall, he will most probably head the joint CDU/Christian Social Union list in Germany’s parliamentary election. With the Christian Democrats’ approval ratings currently very high, they are unlikely to lose the election, meaning Laschet will most likely replace Angela Merkel as German chancellor.

In Laschet’s opinion, even if the Crimean referendum violated international law, Germany still needed to put itself in Russia’s place. He also condemned “demonizing Putin” and said that nearly all of Russia’s concerns about the spread of jihadism during the Syrian civil war were justified. 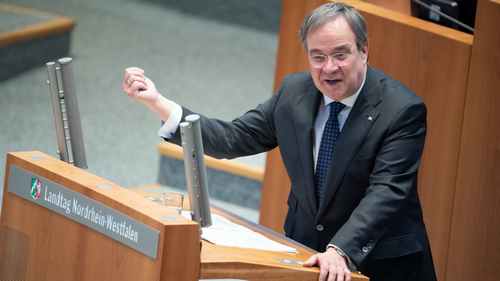 When Russia began its military campaign in Syria in 2015, Laschet challenged the NATO leadership’s position on Russian air strikes in Syria, questioning on Twitter why a Russian air strike against Islamic State was not helpful, while an American strike against the same terrorist organization was. And in the aftermath of the Skripal poisoning in the U.K., he suggested in a tweet that NATO states should have “reliable evidence” before showing solidarity against Russia.

In early 2019, Laschet said that Russia occupies a central place in the global security system and that it is needed to resolve many of the world’s problems. After the attempt on the Russian opposition leader Alexei Navalny’s life and the start of his treatment in Germany, Laschet opposed freezing the construction of Russia’s Nord Stream 2 pipeline (a move floated as retaliation for the poisoning) without consulting other European powers.

Foreign Policy has drawn direct parallels between Laschet and the former chancellor Gerhard Schröder, who is now chairman of the Russian energy giant Rosneft. In fact, Laschet’s pragmatic approach to Russia has deep roots in the economic contact between the Soviet Union and West Germany in the 1970s.

In the same March 2014 interview with Frankfurter Allgemeine Zeitung, Laschet was quite clear about why Germany needs to put itself in Russia’s shoes: he doesn’t want Germany to sever relations with a country that supplies it with 40 percent of its natural gas.

Of course, no one forced Laschet to publicly approve of Russia’s actions in Syria, or to doubt the veracity of the charges in the Skripal case, but he did all of that as a regional politician.

In the latter case, he did so as the prime minister of North Rhine-Westphalia: a state whose major trade partners are Russia and China and which is the number one exporter to Russia among German states. The same rationale informs Laschet’s overtures toward China—such as advocating for Huawei to be granted access to Germany’s 5G network — which have also attracted criticism.

This pragmatic approach to Russia is primarily attributable to business interests, and regional governments are particularly responsive to their business communities, which contribute major tax revenues. North Rhine-Westphalia is Germany’s most densely populated and economically powerful state, and a key industrial hub whose economy is ranked 18th in the world. By making these public pronouncements, Laschet was letting the business community know that he understands and shares its concern and quiet dissatisfaction with anti-Russian sanctions.

The question is whether Laschet will retain his sympathies toward Russia as chancellor, and there is no guarantee that he will. His personal preferences, if they even exist, will have to contend with a number of other factors shaping German foreign policy. And unlike the U.S. or Russian presidents, the German chancellor exerts far less foreign policy influence.

Much will depend on the choice of coalition partner, since the head of the second coalition party generally becomes foreign minister. That place may well be occupied by the Greens after the fall elections, and they take a very tough stance on Russia. The party’s federal leadership has called for Nord Stream 2 to be frozen, and harsher sanctions to be imposed.

German politicians, including those from the CDU, generally agree that establishing closer ties with Russia is unlikely in the foreseeable future. Finally, there are external factors: primarily the position of the new U.S. administration and the situation in other European countries.

There are no indications that Laschet would want to preside over a change in old policies, which combine sanctions that he has said should not be lifted, and specific agreements in certain areas despite the sanctions regime. As a new leader who is weaker than Merkel, he would need to strengthen his domestic policy positions before undertaking any foreign policy overhauls. Even Schröder only became such a close friend of the Kremlin after he left office. While chancellor, he didn’t overly exert himself to establish closer ties between Russia and the EU, although that was far more feasible in the early 2000s than it is now.

But to be compared to Schröder, Laschet first needs to become chancellor, and that may not be straightforward. In most cases, the CDU leader becomes the CDU/CSU candidate for chancellor. But Bavarian CSU leaders have twice managed to get nominated in the federal republic’s history.

The Bavarian state premier Markus Söder holds a significant lead over Laschet in approval ratings, and is now trailing only Angela Merkel.

Technically, the traditionalist Söder should also be closer to Moscow.

Like Laschet, he is against freezing Nord Stream 2. But it’s hard to be closer to Russia now that Russian traditionalism has been reduced to authoritarianism. Having visited Moscow a year ago, the Bavarian prime minister said both before and after his visit that sanctions would remain in place until there are changes to the conditions that triggered them.

The only good news for the Kremlin is that for now, Laschet’s nomination looks more likely. History is not on Söder’s side: under the leadership of the two former Bavarian prime ministers, the CDU and CSU lost both elections. Laschet would also be more suitable for subsequent coalition talks. Therefore, it is quite possible that this fall Laschet will become the first Christian Democrat to form a federal coalition with the Greens — just as Schröder was the first Social Democrat to do so in 1998.

Zapad 2021: What We Learned From Russia’s Massive Military Drills