Turkish President Recep Tayyip Erdogan says a deal has been reached with Russia for Kurdish fighters to withdraw from a Turkish-ruled “safe zone” in northeast Syria within 150 hours, after which Ankara and Moscow will run joint patrols around the area. 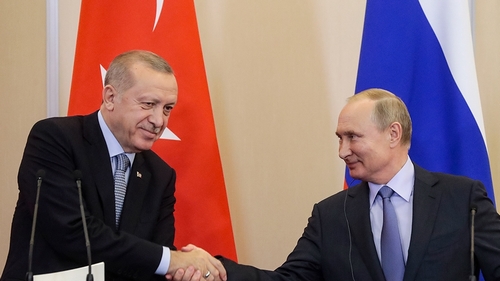 The announcement was made after marathon talks in Sochi between Erdogan and Russian President Vladimir Putin on Tuesday, hours before a United States-brokered five-day truce between Turkish and Kurdish-led forces was due to expire.

On October 9, Turkey launched an offensive aimed at carving out a “safe zone” cleared of the Kurdish-led Syrian Democratic Forces (SDF), which Ankara considers “terrorists”, as well as at repatriating some of the 3.6 million refugees currently residing on its soil.

According to the deal announced at a joint news conference in Sochi, Ankara will control a 32km-wide (20 miles) area between the towns of Tal Abyad and Ras al-Ain, which covers 120km (75 miles) of the Turkish-Syrian border.

Beginning on Wednesday at noon, Russian military police and Syrian border guards will start removing the Kurdish People’s Protection Units (YPG), which spearhead the SDF, and their weapons 30km (19 miles) from the border area. Once this is complete, within 150 hours, Turkish and Russian forces will run joint patrols 10km (six miles) to the east and west of the zone.

Ankara and Moscow, which have backed opposing sides in Syria’s long-running war, also reiterated to their commitment to the preservation of the political unity and territorial integrity of Syria and the protection of national security of Turkey.

The Sochi memorandum also said the YPG and their weapons would be removed from Manbij and Tal Rifat, where Syrian government forces moved in after the Kurdish-led fighters struck a deal with Damascus to fend off a Turkish assault. Russia is Syrian President Bashar al-Assad’s main military ally.

Since last week’s truce deal, Ankara had repeatedly warned that the offensive would immediately restart if the SDF did not withdraw from the region.

“And although the ‘safe zone’ is not as large as Turkey wants, Russian and Syrian control on the areas previously held by the YPG and its removal from the region satisfy these concerns,” he added.

Turkey had long said it wanted to establish a 444km-long (276-mile) and 32km-wide (20-mile) “safe zone”. However, during the truce, the US and the SDF said the withdrawal would only cover an area of about 120km (75 miles) between the towns of Ras al-Ain and Tal Abyad – something that was also confirmed by the agreement reached in Sochi.

Sergey Markov, a political science professor and former member of the Russian parliament, described the result of Tuesday’s talks as a “win-win” situation for Ankara and Moscow.

“The YPG has been removed from a large piece of territory on the Turkish-Syrian border. And it will not be able to support any kind of guerillas in Turkish Kurdistan, let alone carrying attacks itself,” he said.

Ankara considers the YPG, an extension of the armed Kurdistan Workers Party (PKK), which has been fighting against the Turkish state for decades in demand of autonomy.

The US and the European Union consider the PKK a “terrorist” group, but not the SDF and the YPG, which was Washington’s main ground ally in the fight against the Islamic State of Iraq and the Levant (ISIL or ISIS) armed group.

In early October, US President Donald Trump announced a decision to withdraw approximately 1,000 US troops from northeast Syria, created a power vacuum in the region and paving the way for Turkey’s long-threatened operation.

After days of fighting, the Kurdish fighters reached an 11th-hour agreement with Damascus which saw Syrian government troops move into some of the area’s towns and villages, including the flashpoint city of Manbij, for the first time in years.

Officials in Ankara have said that Turkey did not object to Syrian government forces deploying in some of the YPG-held areas as long as the “terrorists” were removed from the region.

Despite backing opposite sides, Turkey and Russia since 2017 have been in close cooperation through the so-called “Astana talks” that aim to find a solution to the Syrian conflict and create a new constitution for the country.

According to Markov, Russia is happy to deal with Turkey and pleased that the US and the European Union are out of “the Syria game”.

“As a result of the current situation, Damascus now controls far more territory, and Kurds are now loyal to the Syrian government, frightened of Ankara,” he said.

“Now, they have to be a part of unified peaceful Syrian process.”

Tuesday’s memorandum of understanding also reiterated Russia and Turkey’s commitment to the Astana process, which also includes Iran, another major backer of al-Assad.

Various so-called “de-escalation zones” have been agreed among the three guarantor powers in Syria as a result of multiple rounds of talks within the process.

“Moscow wants to increase the Syrian government’s perceived legitimacy internationally and making of a new constitution is the way for it,” Han, the professor, said.

“The deal between the two sides and their smooth relationship also further solidifies this process and Damascus’s legitimacy.”

Trump’s tweets anger, but do not surprise, Puerto Ricans