Update: As of Friday afternoon, the Federal Emergency Management Agency is once again reporting two key statistics – the percentage of Puerto Ricans who have access to drinking water and the percentage of the island that has power – on its webpage tracking the federal response to Hurricane Maria.

As of Wednesday, half of Puerto Ricans had access to drinking water and 5 percent of the island had electricity, according to statistics published by the Federal Emergency Management Agency on its Web page documenting the federal response to Hurricane Maria.

By Thursday morning, both of those key metrics were no longer on the Web page.

FEMA spokesman William Booher noted that both measures are still being reported on a website maintained by the office of Puerto Rican Gov. Ricardo Rosselló, www.status.pr. According to that website, which is in Spanish, 9.2 percent of the island now has power and 54.2 percent of residents have access to drinking water. Booher said that these measures are also shared in news conferences and media calls that happen twice a day, but he didn’t elaborate on why they are no longer on the main FEMA page.

“Our mission is to support the governor and his response priorities through the unified command structure to help Puerto Ricans recover and return to routines. Information on the stats you are specifically looking for are readily available” on the website maintained by the governor’s office, Booher said.

The statistics that are on the FEMA page, as of Thursday afternoon, include these: There are now 14,000 federal workers on the ground in Puerto Rico and the U.S. Virgin Islands, up from 12,300 earlier in the week. All airports, federally maintained ports and post offices are open. More than 30 miles of roadway have been cleared, up from about 20 miles earlier in the week. About 65 percent of grocery stores have reopened, along with nearly all hospitals and dialysis centers. And 64 percent of wastewater treatment plants are working on generator power.

A tale of two Puerto Ricos: What Trump saw – and what he didn’t

Those statistics illustrate President Trump’s assertions that the island is quickly making tremendous strides toward full recovery and that the media have exaggerated the conditions on the ground. He has noted that despite the force of the storms that hit Puerto Rico, the death toll is not as high as it was after Hurricane Katrina in 2005, when about 1,800 people were killed. Officials have said that it could be months before power and water are fully restored to the island, especially in rural, isolated areas.

Trump, who visited Puerto Rico on Tuesday, has repeatedly noted that the infrastructure of the financially struggling island was already weak before the hurricane hit. In a series of tweets  Sept. 25, Trump wrote that Puerto Rico was “already suffering from broken infrastructure & massive debt” and had an “old electrical grid, which was in terrible shape.” During his visit, Trump told reporters that it’s difficult to fix the power grid because it “was devastated before the hurricanes even hit,” and that federal workers have been bringing dozens of generators to the island to power hospitals, government buildings, shelters and other key locations.

Hurricane Maria knocked out the electricity in Miram Carrasquillo’s home in Canóvanas, Puerto Rico. Ten days after the storm, she was able to get a small generator to power her nebulizer. Authorities say it could be months before the electrical grid is up and running again. (Zoeann Murphy,Victoria Walker,Melissa Macaya,Adriana Usero/The Washington Post)
Post Views: 211 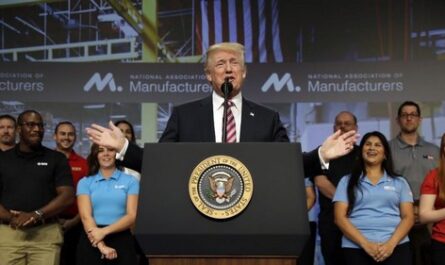