Trump’s itinerary features a swing through the major powers in Northeast Asia – Japan, South Korea and China – whose leaders he has met with several times already in a bid to develop a strategy to increase pressure on Pyongyang.

The president also will participate in regional economic and security conferences in Vietnam and the Philippines, the White House announced Friday.

President Trump will visit five countries in Asia from Nov. 3-14 on a marathon trip that will be largely focused on his efforts to confront North Korea over its nuclear and ballistic missile programs.

It is not clear whether Trump intends to hold bilateral meetings with Vietnamese leaders or Philippine President Rodrigo Duterte, who is hosting the Association of Southeast Asian Nations conference in Manila. Duterte has come under international criticism for his administration’s brutal crackdown on drug trafficking, which has resulted in thousands of extrajudicial killings.

Trump calls Kim Jong Un a ‘madman with nuclear weapons,’ according to transcript of Duterte call

Trump praised Duterte’s drug war in a phone call in April during which the American president sought to enlist his counterpart to lobby China to put more pressure on North Korea.

Trump’s “engagements will strengthen the international resolve to confront the North Korean threat and ensure the complete, verifiable, and irreversible denuclearization of the Korean Peninsula,” the White House said in a statement announcing the trip.

Trump announced last week that he had signed an executive action giving the Treasury Department greater authority to sanction foreign businesses and individuals that conduct trade with North Korea, an effort to cut off funding that Kim Jong Un’s regime could use for its weapons programs. That move followed Trump’s speech at the United Nations General Assembly, in which he threatened to “totally destroy” the North if necessary and referred derisively to Kim as the “rocket man.”

North Korea’s words are the same. It’s Trump’s reaction that makes this different.

Kim lambasted Trump in a rare direct address, and Pyongyang said the president’s speech amounted to a declaration of war, a charge the White House rejected.

On his trip, Trump also is expected to focus on economics and trade. He has said his administration intends to attempt to renegotiate a bilateral trade deal with South Korea that was signed by President Barack Obama in 2011.

South Korean Foreign Minister Kang Kyung-wha called that trade deal the “economic tool that locks in a peaceful, prosperous future together” during an appearance at the Center for Strategic and International Studies this week. 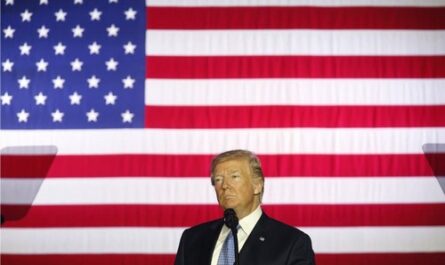