Skip to content
24.10.2020
Russian press
MOSCOW, August 13 – RIA Novosti, Alexander Lesnykh. The treasury of Ukraine emptied by almost 80 percent – from 9.3 to 1.9 billion hryvnia. This is the lowest since January 2014. Experts warn: the country is on the verge of financial chaos. What will happen if in the near future the International Monetary Fund (IMF) does not allocate a new loan, – in the RIA Novosti news agency.

The Ministry of Finance of Ukraine has established a new anti-record since the coup in 2014: on government accounts, only 1.9 billion hryvnia – just over $ 70 million. Pensioners and state employees will soon have nothing to pay.The main financial problem of the country is huge debts, primarily to the International Monetary Fund. 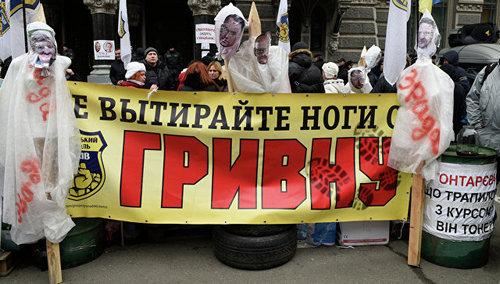 “They should give the creditors about 10 billion dollars a year, of which 4.6 million-4.9 billion must be transferred to the IMF, if not, automatically defaulted, while the entire budget is from 33 to 45 billion, according to which exchange rate hryvnia count, “- told RIA Novosti president of the Center for Strategic Communications Dmitry Abzalov.

In 2019, the situation will only worsen: more than 6.5 billion dollars will be transferred to the IMF. “Is it possible to pay the IMF without receiving new tranches? It is impossible for today,” Rada MP Vadim Denisenko admitted in early August.

The same opinion is shared by the chairman of the National Bank of Ukraine Dmitry Sologub. “The government will need additional money to fill in the gaps.” The problem is that there are very few sources of financing, “he said.

IMF is not in a hurry

In early 2018, Ukraine came in second place in the world in debt to the IMF: $ 11.9 billion. More only in Greece – 12.8 billion. Now Kiev hopes for the next tranche, due to which it plans to fulfill its financial obligations this year. However, in order to receive money, it is necessary to fulfill two conditions. The first is to form an anti-corruption court. The corresponding bill in Kiev after a series of scandals finally prepared, and it even recently received the approval of IMF experts.The second requirement is an increase in gas tariffs. This is much more difficult: President Poroshenko will somehow explain to citizens that the rise in price of housing and communal services by 60-65 percent is the only chance for saving the country from falling into a debt hole. Already, the debts of the population for the communal area exceed 36.8 billion hryvnia, and half of Ukrainians do not pay utility bills at all.

For a long time, Kiev tried to ignore the requirements of the IMF, but in early August, US Secretary of State Mike Pompeo personally urged Poroshenko to fulfill all the conditions of the fund, so that there were no more loopholes.

Trying to find another source of money for the economy, the Kiev authorities turned their gaze to the East. At the end of last year, Minister of Infrastructure Vladimir Omelyan said that he had discussed with his colleagues from the PRC the possibility of attracting Chinese investments of seven billion dollars. He specified that it was a question of railway cars, concession roads and bridges, seaports and almost of Ukraine joining the project of the new Silk Road as a key partner.The experts reacted coolly to Omelyan’s statement. For example, the transport specialist Alexander Kava noted that the Chinese will not enter into concession contracts with Kiev because of the high risks that will completely fall on the shoulders of investors.

Many remembered that Beijing already has a negative experience of lending to Ukraine. In 2012, Kiev was given a loan of $ 3 billion, half of which was to purchase Chinese agricultural equipment, half to buy grain and corn for subsequent supplies to China. But because of the events of 2014, Kiev fulfilled its obligations only by 20 percent. China had to sue the London arbitration.