August 26 Abkhazia and South Ossetia celebrate the 10th anniversary of the recognition of their independence by Russia. President Putin intends to congratulate the heads of these republics personally and for this purpose invited them to Moscow. Negotiations of the Russian leader with the presidents of Abkhazia and South Ossetia Raul Khajimba and Anatoly Bibilov took place on Friday, August 24. To celebrate the anniversary on Sunday, the presidents will be at home with their people. 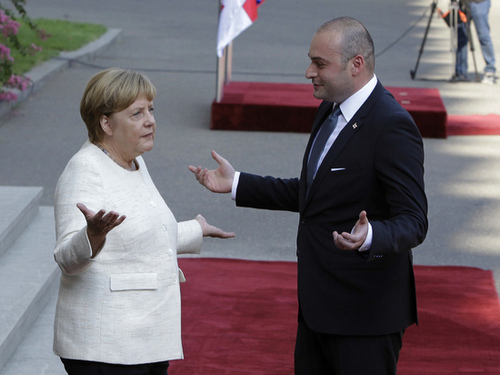 While Russia, Abkhazia and South Ossetia are celebrating and congratulating each other, German Chancellor Angela Merkel is making a tour of the South Caucasus. For three days, from August 23 to 25, she intends to visit Georgia, Armenia and Azerbaijan. Chancellor from Georgia started. Last time Merkel visited Tbilisi exactly 10 years ago – in August 2008, after the end of the “five-day war”. It is symbolic that the visit began precisely with Tbilisi – Georgia remains the key partner of the West in the Caucasus. Of course, it was important for the Chancellor to support a loyal ally, especially on the eve of the tragic date for Georgia on August 26. In Tbilisi, Merkel again expressed her support for the territorial integrity of the country, laid a wreath at the monument to the soldiers who died in August 2008 and visited the village of Odzisi on the border with South Ossetia,

It is interesting that the German Chancellor in her trip to the border was accompanied not by Georgian officials, but by the staff of the observation mission of the European Union. Curious were some of the statements of the Chancellor. For example, at a meeting with students at Tbilisi University, she said that although Germany supports the process of Georgia’s integration into NATO, it is impossible to talk about the country’s imminent accession to the alliance. She also noted that “the EU and NATO are not enemies of Russia.” In general, the observers got the impression that she was avoiding direct answers to journalists’ questions about whether she was discussing the problem of the territorial integrity of Georgia with Vladimir Putin. So, she said that at a recent meeting on August 18, they talked with Putin about “Ukraine, and this is a single context.” From which we can conclude that the problem of South Ossetia and Abkhazia was not discussed at the meeting with Putin.

After talks in Tbilisi with both Prime Minister Mamuka Bakhtadze and President Georgi Margvelashvili, as well as with representatives of the opposition, Merkel flew to Yerevan on August 24. But before that, it became known about another result of her visit to Georgia. According to the German embassy in Tbilisi, during the talks, agreements were reached on the construction of the first underground gas storage facility in Georgia, to which the German Bank for Reconstruction and Development allocates 150 million euros. It was then that those experts who said that the gas would be the main topic of Merkel’s visit to the South Caucasus and that it was not by chance that it happened soon after the negotiations of the German chancellor with Vladimir Putin had received a serious trump card. Not escaped the attention of observers and the fact that Merkel on the trip accompanies a large group of German businessmen.

Everything is clear with Armenia. Merkel probably wants to assess the situation in the country after the recent “velvet revolution”. Her talks with Prime Minister Nikol Pashinyan are planned. They already met at the NATO summit in July, and after that Pashinyan expressed dissatisfaction with the EU’s policy towards Armenia. “We have been able to eradicate corruption for two months without external assistance,” the Armenian prime minister said. “We did not need the millions that were allocated to the previous authorities to fight corruption. This approach is surprising. ” It is probably necessary to understand this: despite the fact that Armenia successfully conducted the “velvet revolution” and resolutely opened for “European values”, the expected financial incentive from Europe was not followed. And it is possible that it will not follow as long as Armenia remains an ally of Russia. Merkel, probably,

Visiting Azerbaijan is scheduled for the last day of the Chancellor’s visit – August 25. Azerbaijan is not the most democratic country in the world, but rich in resources. And this allows her to feel the master of the situation to such an extent that on the eve of the visit of the Chancellor of Baku, the member of her delegation, the deputy of the Bundestag, Albert Weiler, refused to enter – for the fact that he visited Karabakh. So what? But nothing: Berlin expressed “regret”, but the trip took place without Weiler. Baku is probably the most important item on Merkel’s agenda in the South Caucasus. Germany needs Azerbaijani gas. In addition, she needs gas from Iran and Tajikistan. And the transit corridor through the South Caucasus for the supply of energy, perhaps even bypassing US sanctions against Iran, which deal with the ban on the purchase of Iranian energy.