Skip to content
24.10.2020
Russian press
The US plans to deploy a missile defense system in the north of Syria, the media reported. On air radio Sputnik military political scientist Andrei Koshkin suggested the further development of events, noting that the US is steadily destabilizing the situation in the UAR.

The Pentagon is preparing to deploy a missile defense system in some cities in northern Syria, the Turkish edition of Yeni Safak reports with reference to the former commander of the military assembly of the Syrian province of Deir ez Zay Fayez Al Esmera. 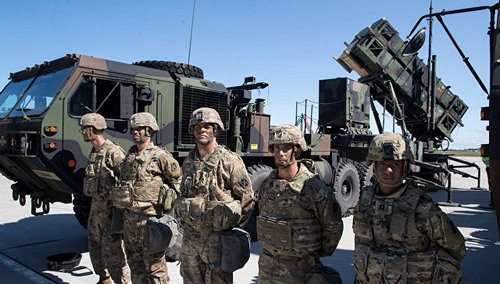 According to the publication, the United States has already installed three advanced radar systems in the Syrian areas of Tal Baidar, Kobani (Ain el-Arab) and Sarrin, and deployed 13 portable and stationary radar systems for surveillance and reconnaissance.“The next step of the US will be the creation of a missile defense system in the region that should be considered part of Washington’s long-term plan to create chaos in the region,” Al-Esmer said. According to him, the US plans to install systems in the cities of El-Khasaka and Rmeilyan.

It is also reported that the US is creating a no-fly zone in the north of Syria and deploying radar systems on a territory of 26,000 square kilometers occupied by the Kurdish party “Democratic Union” (PYD), east of the Euphrates.

Al-Esmer noted that these steps show the intention of the US administration to strengthen its presence in Syria while providing assistance to the Kurdistan Workers Party (PKK) banned in Turkey. According to him, radar systems will be used to monitor Turkey’s air and ground operations on the border. US military aircraft will be most active in the regions of El Hasaka, Rakka and Deir ez Zor, and the information received there will be transmitted to the Air Force to create a “protective screen,” Al-Esmer said. He added that all these steps are being taken in order to “intimidate” Turkey, Russia and Iran.On air radio Sputnik military political scientist, head of the department of political science and sociology RGM them. Plekhanov Andrei Koshkin suggested a further development of events.

“The United States is purposefully and steadily destabilizing the situation in Syria, and now they want to destroy the statehood – the military is starting to do it, creating a missile defense system that they must provide for some unmanned zone from Manbij to Deir-ez-Zor. resistance is broken, government troops are ready in the near future to completely clean the territory of Syria from the militants of terrorist organizations. However, now the essence of the US is manifested, which primarily needs destabilization for They continue to insist on the departure of Bashar Assad and do everything possible for this.The unmanned zone is an attempt to wrest a part of the sky and then a part of the territory where it is possible to create a quasi-state and destroy the Syrian statehood as a whole “