Getting rid of the lion’s share of savings in US government bonds, Russia is actively buying up another investment tool – gold. In July, the Central Bank purchased more than 26 tons of yellow metal, increasing its total reserves to 1.97 thousand tons. Now Russia is on the fifth place in gold reserves in the world, having overtaken even China. In dollar terms, the Russian gold reserves at the current exchange rate exceed $ 77 billion. However, some experts consider it questionable to refuse to invest in US bonds and switch to gold. Since the middle of summer, yellow metal has fallen in price by almost 10%. In the future, his quotes risk decreasing even more. Therefore, Russia’s political move, which decided to break with American bonds that brought in a stable income, could be an economic mistake.

As follows from the statistics of the International Monetary Fund, in July 2018, the Bank of Russia purchased about 840 thousand troy ounces (one ounce – 31.1 grams), or more than 26 tons of gold. Such a significant volume of yellow metal regulator bought the last time in November 2017: then it was purchased more than 27 tons. This pace this summer has not replenished its reserves more than any central bank in the world. 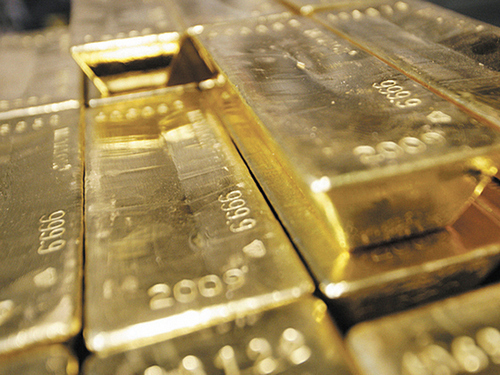 According to the senior BCS analyst Sergey Suverov, the activation of replenishment of the gold reserve of the Central Bank is connected with the sale of US Treasury bonds by Russia. A year ago, our country kept about $ 110 billion of savings in these securities. At present, investments in US government bonds have fallen to $ 15 billion. The reason was the aggravation of geopolitical relations between Moscow and Washington, as well as the threat of tightening US sanctions against our country. American senators have repeatedly tried to limit the circulation of Russian government debt securities in the market of the United States. Even more troubles will be the possible “freezing” of dollar bills of Russian state-owned banks in American credit institutions. In this case, their currency deficit, most likely, the Central Bank will have to cover out of its reserves,

According to Suverov, gold as such an alternative is quite acceptable. After the crisis of 2008-2009, the world’s largest central banks began to build up reserves in this metal, since gold is considered one of the main anti-inflation tools. The majority of countries that have spoiled their relations with Washington are moving to investments in this precious metal. For example, in 2017, the Turkish Central Bank transferred the entire reserve stock to gold due to deterioration of relations with the United States.

According to some experts, Moscow’s move in this direction is a reasonable step. “Russia is in a state of financial war (with the main Western financial powers -” MK “). The Central Bank of Russia gets rid of dollars and invests in gold. This will protect against the freezing of dollar assets, “- says the editor of Strategic Intelligence, Jim Rickards. “The purchase of gold is aimed at reducing the sanctions risks for Russian assets,” the expert of the International Financial Center Vladimir Rozhankovsky agrees.

Meanwhile, not all experts share this opinion. According to Igor Nikolaev, Doctor of Economics, the value of gold is subject to high volatility. In mid-June, the price of a troy ounce exceeded $ 1.3 thousand. Now its price barely reaches $ 1,195 thousand. In other words, in two months, gold quotes have lost about 9%, while the annual yield of US Treasury bonds holds around 2-3%.

Experts do not exclude that in the near future the price of gold in world markets will continue to fall: the minutes of the meeting of the Federal Reserve in August indicate that the American regulator will continue to raise the interest rate on loans, which will raise the dollar’s exchange rate and reduce the attractiveness of gold quotes. Then the troy ounce can fall by almost 5% – up to $ 1.25 thousand, as it was at the end of 2017. The cost of Russian gold reserves in this case will drop from $ 77 billion to $ 73 billion.

According to financial analyst FxPro Alexander Kuptsekevich, buying gold instead of US treasuries is a political, not an economic step. “The US bonds reflect the main property of strategic reserves: they can be quickly sold in a period of market instability. The bet on gold is a calculation for an excessively long-term perspective. The growth of purchases of yellow metal from the central banks of large countries can not support quotes. Therefore, investing in gold is not yet an adequate analogue of investments in US bonds, “the analyst believes.

Moscow police arrest up to 200 ahead of election protest