Russians should not invest in gold after the Central Bank to save their savings – this makes economic sense only if the money put aside for a “rainy day” is estimated in billions, says Oleg Vyugin, professor at the Faculty of Economic Sciences at the Higher School of Economics.

The physical volume of gold in international reserves of Russia has been steadily growing in recent years: as of January 1, 2007, gold reserves were 402 tons, and as of August 1, 2018, they were more than 1968 tons.

“Gold is not worth more than 10% in such portfolios, but if a person does not measure billions, then the question is: what is the tenth part for gold, – said RIA Novosti Vyugin, in the past held senior positions in the Ministry of Finance and the Central Bank. 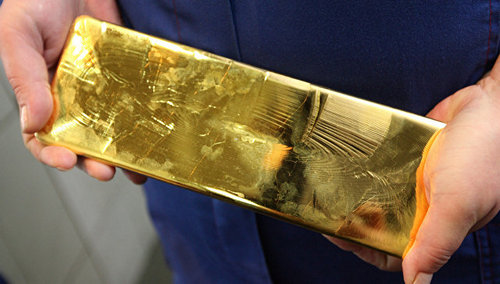 The example of the Bank of Russia, which increases the purchase of gold for geopolitical reasons, in order to secure reserves in case of imposing restrictions on settlements in dollars, is not suitable for ordinary people: contrary to popular belief, gold is not stable in price and does not yield an income comparable to other financial instruments, the economist is sure.

He warms his soul and saves him from sanctions

Non-professional investors often make a choice in favor of gold for psychological reasons: the presence of gold and jewelry “warms the soul, because it’s still” eternal value, “notes Vyugin.“Our history for the last hundred years is very difficult: how many times the savings were lost, how many times they were seized… Therefore, the gold, hidden somewhere, then supposedly will save or help in a difficult situation, and not because it can be earned,” Professor.

The central bank buys gold for other purposes, Vyugin explains. In the structure of the country’s currency reserves, gold is used as a “safety cushion” to optimize and secure savings, since no currency of the world is protected from potential problems. But despite the fact that gold is a recognized standard in the international market, it can bring revenues except in a “severe crisis,” explains Vyugin.

“In recent years, the Central Bank has been buying up gold already because of the threat of sanctions, since Russia is in tensions and disagreements with Western countries.We began to diversify reserves in the direction of gold to get away from the dollar.This is the latest trends, a reaction to confrontation, primarily with America.There is not an economic motive, it is a political motive, “the expert said.

What to buy for a rainy day

The current appreciation of the dollar against the currencies of emerging markets is associated with an increase in the rates of the Federal Reserve System of the United States: because of this, the world’s currency is shrinking, which leads to a fall in the value of other currencies. According to Vyugin, the ruble has not escaped this either, although the sanctions factor plays a rather significant role in this process.The US currency in the dynamics of 10-15 years shows that if a person then bought dollars, then today he would be in positive territory, earning in rubles up to 10% per annum. “But this” if. “Now it’s not possible to buy dollars at 68 rubles, is this a reasonable step,” the economist stressed.

However, now the Russians should diversify their savings by buying some of the US currency. “Then it will be even calmer on the soul, because if the ruble falls, you think that your dollars are growing at a ruble price,” Vyugin said.

Business from the dollar will not give up

So far, companies that supply oil and other natural resources to the world market will not be able to abandon the dollar, Vyugin acknowledges.The pricing of oil, metals, many agricultural products and chemical products occurs in dollars, and the transition to the calculation of them in a different currency will lead to companies having to take risks of this currency, which is unprofitable for them.

Another reason: the dollar, because of historical circumstances, is a reserve currency for the world, because until now central banks in the world hold a large share of dollars as a reserve, he explains.

“In order for some country to abandon the dollar in its foreign trade, it needs counteragents (it can be both private companies and state ones) also abandoned the dollar in trade with it.” There is no economic motivation, but political motives to do it will be difficult, “- explained the economist.

Go to Italy in the Center of Moscow