But with three weeks until the presidential election, political analysts don’t see a viable strategy 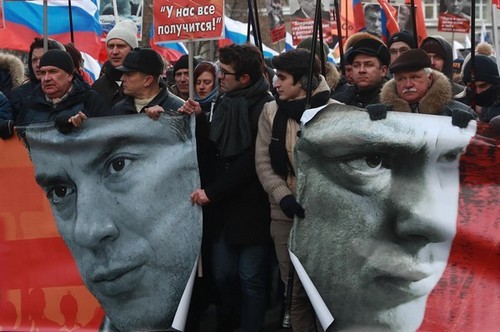 For the third year running on Sunday afternoon, the disparate political movements in opposition to Russian President Vladimir Putin came together – if only for a brief few hours – to march in the memory of murdered Kremlin critic Boris Nemtsov.

“The march is symbolically important for the entire democratic opposition,” one of the march’s organizers, Moscow municipal deputy Ilya Yashin, told The Moscow Times a day earlier. “We of course have many different views, but on this day each year it all becomes secondary.”

Yet with only three weeks to go until a presidential election that Putin is widely expected to win, political analysts say that Sunday’s temporary unity was just that: symbolic.

Nearly three years ago, on Feb. 27, 2015, Russia’s opposition movement lost one of its most lauded leaders, when the former deputy prime minister was shot in the back while crossing the Bolshoi Moskvoretsky Bridge, just steps from the Kremlin.

The death of one of Putin’s fiercest critics was widely suspected to have been a planned assassination from the upper echelons of the Chechen leadership and tacitly condoned by the Kremlin. Although five men were convicted for the killing last year, Nemtsov’s family and supporters believe those who masterminded his murder are still walking free.

On Sunday afternoon, marchers carried signs and broke out into chants, blaming both Putin and Ramzan Kadyrov, the leader of Chechnya, as having been responsible for his death.

But beyond the calls for justice for Nemtsov, his supporters also demanded that Putin leave power altogether, regularly shouting, “Russia without Putin.” 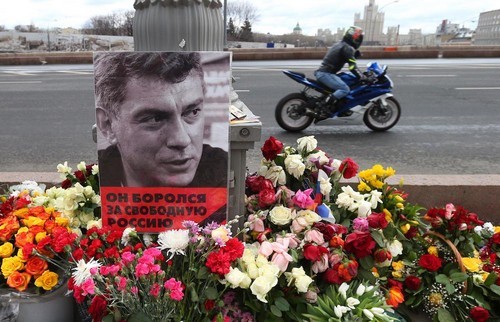 The refrain echoed cries from protests organized by opposition activist Alexei Navalny one month ago, calling for a boycott of the March 18 vote. Navalny, who many see as Russia’s only real opposition figure, called for the boycott after he was barred from the ballot in a move he and his supporters say was politically motivated.

“The state of the opposition is ragged because there isn’t a unifying figure,” said Boris, a 73-year-old former construction worker who declined to give his last name for fear of retribution. “But the youth is backing Navalny, and so we have to hope that he will be allowed to run in the next presidential election.”

That, for political analyst Dmitry Oreshkin, is not only unlikely, but not something for Russia’s opposition to put its hopes in from a strategic perspective.

“The Kremlin is winning this game,” he told The Moscow Times. “By keeping Navalny out of this election, they’ve turned him into more of a dissident than a political leader. And as a dissident, he loses his power.”

Some, including Oreshkin, believe the Communist Party nominee Pavel Grudnin and the independent candidate Ksenia Sobchak, are “spoilers,” planted by the Kremlin to dilute the opposition vote.

“It’s all been orchestrated,” Oreshkin explained.

On Sunday, Sobchak was at the front of the march from the beginning to the end. She had also made noise earlier when a plaque on the house in which Nemtsov lived was approved – according to Moscow Mayor Sergei Sobyanin, at her request.

Organizers had expected 30,000 to turn out for the Moscow march that was sanctioned by city officials, but activists said that just 7,600 did. There were gatherings in other cities too. And, save three arrests in the capital according to OVD-Info, a police-monitoring organization, the march started and finished calmly. 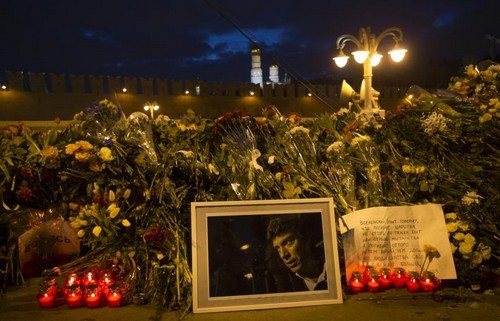 It was also a who’s who of other prominent opposition politicians. In addition to Sobchak, there was fellow liberal presidential candidate Grigory Yavlinsky, former Duma deputy Dmitry Gudkov and Navalny, walking quietly at the middle of the pack.

For former Kremlin advisor Gleb Pavlovsky, one of the main issues with the opposition today is that the bulk of its leaders are “stale” – holdovers from the intense burst of protests in 2011 and 2012 that soon faded. They have also, he said, lost a sense of direction.

“What the opposition is today is difficult to discern,” he said. “As far as I can tell, there is no visible organization or strategy.”

Still, Pavlovsky sees issues bubbling below the surface that he thinks will rise up over the next few years, as Russians become increasingly frustrated with economic difficulties under the current leadership. He pointed to the protests against the planned government razing of the Khrushchevki apartments last summer that drew thousands of protesters spontaneously.

“The trick now will be for those protests to become sustained,” Pavlovsky said. “But I expect we will see that over the first year or two of Putin’s next term.”

Valentina Popova, a 78-year-old pensioner, told The Moscow Times that she has been protesting Putin’s regime since billionaire Mikhail Khodorkovsky was sentenced to prison in 2005. She would continue to do so, she said, “even if nothing changes.”

One issue she pointed to was that the opposition had failed to form a unified front. But “the real problem,” she said, “is that we are not people who can battle like those in power. That is why they win.”

“By killing us,” she answered.

Belousov: oil workers will not be attracted to work on investment development