Skip to content
27.10.2020
Russian press
MOSCOW, August 7 – RIA Novosti, Maxim Rubchenko. Moscow has announced reciprocal import duties on American goods, Washington is imposing trade sanctions against Iran and Turkey, increasing pressure on China, Beijing has threatened to pay another five thousand goods from the United States. What problems are facing a new round of the trade war for the American economy – in RIA Novosti’s material.

Since August 5, Russia has increased to 25-40% of the rate for imports from the United States of vehicles for the transport of goods, construction and road machinery, oil and gas equipment, tools for metal processing and rock drilling, and fiber. These decisions were taken in response to Washington’s previously established protective duties on steel and aluminum.

According to the Ministry of Economic Development, exports of steel from Russia to the US exceeded $ 1.5 billion a year, aluminum – was approaching $ 1.6 billion. 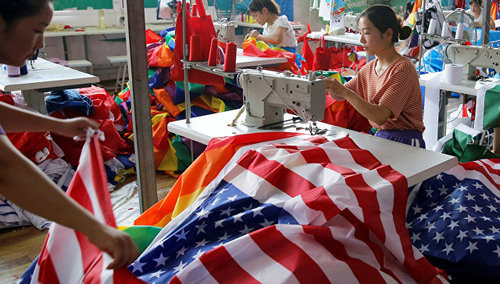 Because of the 25% duty imposed on steel by the Trump administration, Russian metallurgists lose $ 378.1 million. The duty on aluminum is ten percent, respectively, exporters are missing 159.5 million. Total – 537.6 million dollars a year.

At the first stage, the volume of additional duties of Russia will amount to $ 87.6 million per year. “This is the compensation that the country now has the right to follow the rules of the World Trade Organization,” said Maxim Oreshkin, head of the Ministry of Economic Development.

Experts note that Russian protective measures are aimed primarily at supporting domestic producers and are concerned with goods that are successfully produced in the country. For example, fiber.

The first in Russia plant for the production of telecommunications optical fiber JSC “Optical fiber systems” was opened in Mordovia in 2015. Its annual capacity – two and a half million kilometers of optical fiber – covers half of the needs of the Russian market. The products are also exported to China, Austria, Great Britain, Czech Republic and Poland.

In autumn 2017, Prime Minister Dmitry Medvedev at a meeting of the government commission on import substitution said that in the coming years Russia should reduce the import of optical fiber and provide an opportunity for domestic producers to take their place in the market.

Additional duties on other US goods for another $ 450 million will be introduced in three years or by the decision of the WTO. In any case, the damage to the US economy, specifically from Russian duties, is small simply because of the small amount of mutual trade.

According to the Ministry of Economic Development, the trade turnover between Russia and the United States is $ 23.1 billion. Any protectionist measures at such volumes create problems only for individual companies, but not for the national economy as a whole.

However, duties on American goods are not only increased by Russia. The European Union, Canada, Mexico, Japan, Turkey, India also announced countermeasures totaling several billion dollars (of which only the EU – by 3.3 billion).

The economic contradictions between the US and China have resulted in a separate trade war, the rates in which are constantly growing. Last week, the White House confirmed its intention to impose a 25 percent duty on the import of Chinese goods and services worth $ 200 billion a year (after the US and China had already exchanged duties of $ 34 billion on each side in early July).

In response, Beijing promised a tax on 5,207 US goods, including small and medium-sized aircraft, soybean oil, timber, auto parts. In addition, the PRC threatens to impose a 25 percent tariff on US energy carriers, including oil and liquefied natural gas.

Experts note that at an oil price of about $ 70 per barrel, the protective duty, which makes American oil completely uncompetitive, is about $ 18 per barrel. Moreover, Chinese companies are reducing purchases of oil in the US, even without waiting for a formal introduction of duties.

So, the trading division of the Chinese state concern Sinopec – Unipec has already suspended import of American oil by October. This is reported by Reuters, citing sources familiar with the situation.

In mid-July, an independent Chinese refiner, Dongming Petrochemical Group, suspended the purchase of crude oil in the United States. PetroChina, Zhenhua Oil and other companies are planning to drastically reduce imports of American oil.

The energy sector is almost the only one where the US has a surplus in trade with China. Such losses are very painful for Americans.

This is just the beginning

Trump still manages to keep a good face in a bad game. “Tariffs work much better than anyone expected,” he told Twitter. “Thanks to the tariffs, we will be able to start paying large sums of $ 21 trillion in debt, a large part of which was accumulated by the Obama administration.” Our market is stronger than ever , and will sharply go into growth after the successful revision of these terrible trade transactions. “

The US president kept silent that his administration had already been forced to allocate $ 12 billion to US farmers to protect them from the effects of the trade war. In particular, the government will buy soybeans for this money, which is now impossible to sell to China.

Chinese restrictions on energy imports will be even more expensive. Experts estimate that this year China bought from the United States an average of 335,000 barrels of oil per day, but in September this volume is expected to almost halve.

“American companies will have to redirect hundreds of thousands of barrels a day from the Chinese market to other markets, inevitably losing in price,” commented Jacob Dubeck, an energy specialist at the Washington-based law firm Eversheds Sutherland.

Even greater losses to Americans are threatened by the Chinese protective duty on liquefied natural gas.

The US expects in the coming years to become one of the largest LNG producers in the world, with China being regarded as the main buyer: 15% of the US export of liquefied gas already goes to it.

Protective duties will put an end to LNG projects with a total capacity of approximately 100 million tons.

“Other producers, first of all Russian ones, will fill the niche with pleasure, and we will miss huge opportunities with the most serious consequences for the industry,” admits Charlie Riedl, head of the non-profit organization Center for LNG, representing the interests of American liquefied natural gas producers.

But the main long-term losses for the United States from the new round of the trade war are connected with the loss of international influence. “Virtually all countries now ignore the United States and are building a post-American world economy,” says prominent economist Adam Posen in an article published by Foreign Affairs magazine.

This is evidenced by the abundance of trade agreements without US participation: from the trans-Pacific partnership to the EU’s trade deal with Japan. “A lot of similar agreements are under development,” Posen said.

Another alarm bell is a sharp drop in foreign investment: twice from 2016. “This is an unpleasant trend, as the large fiscal stimulus adopted by the congress should, on the contrary, increase direct investment,” the economist points out.

And adds that for decades the United States has been distinguished by a unique combination of a good growth outlook with a stable and predictable market policy.

“Trump’s attacks on trade and allies, his willingness to punish and reward individual companies, his general unreliability – all this together creates the image of an unstable developing country ruled by a strong man,” Posen states. “” With the only peculiarity that a strong American leader has the opportunity destroy the entire global economy. “