Skip to content
24.10.2020
Russian press
Twenty years ago the last Soviet military facility, the radar station in Skrund, was closed in the Baltic States. Now here is a ghost town. Other objects turned into vegetable gardens, vegetable stores or they were simply looted. Some were lucky to become museums, they gave something to NATO. On how to deal with the Soviet military heritage in the Baltic – in the material of RIA Novosti. 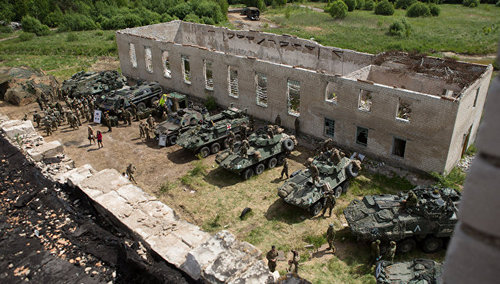 The base in Skrund, built in the 1960s, shortly before the closure, was reconstructed and improved. After the collapse of the USSR, the station that tracked the launches of ballistic missiles from NATO submarines in the Norwegian and North Seas went to the Republic of Latvia. For rent Russia paid five million dollars a year. In 1994, at the request of the Latvian government, they signed an agreement on the withdrawal of the Russian military, and in early May 1995 the building of the new reception unit Daryal was blown up by the American company Control Demolition Incorporated. In 1999, the work and installation of the “Dnepr” ceased. For the demolition of buildings and clearance of territory, Russia paid seven million dollars. There remained only an empty military town for five thousand troops. 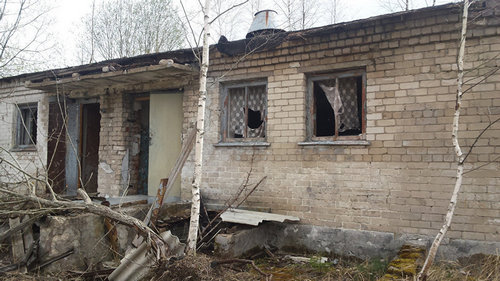 On its conservation in 2000, the government of Latvia allocated 1.7 million dollars. In December 2009, the object was auctioned at a starting price of 150 thousand lats (220 thousand euros, the price of a four-room apartment in Riga). However, those who wish to acquire all this good have not been found. But the military town was popular with filmmakers and tourists.

“At the training center of the former military complex, desolation now reigns, but there are still a few things – students’ journals with grades, military things, visual aids.” The weapons room is well preserved. “In the guard room,” wallpaper “, invented by inventive Soviet military: and painted with oil paint. “Wallpapers” are very informative. You can learn from them what the country was living in those years, “eyewitnesses testify.

Recently, the ghost town was chosen by the army of Latvia – for training, and in July 2016 the head of the Ministry of Defense Raymond Bergmanis announced that a NATO polygon would be created there. According to him, this territory of 45 hectares, including about seventy real estate objects (barracks, ten block houses, a school, a kindergarten, a hotel and a hospital), is an excellent platform for tactical exercises in an urbanized environment. In the command of the alliance this is confirmed. 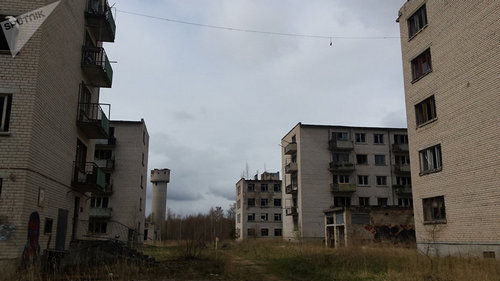 In all, more than a thousand military units stationed in the Latvian SSR had about six hundred objects. All these objects were officially handed over to the Latvian authorities in 1993.

The military training ground in Adazi (near Riga), which in its time served as the main training ground for the land forces of the Red Banner Baltic Region, was lucky. It is still being actively used – it houses the army units of the NATO countries arriving in the republic, maneuvers are held regularly. The fate of many other military facilities is less enviable.

“Something was guarded for a while, these were the objects that the local armed forces hoped to use, and then a period of general robbery came in. They dragged everything-right up to the bolts and concrete slabs from the airfields and roads-no one guarded anything. the mines did not stand a chance, I know many examples when the land owner who found the first himself plundered everything, when everyone pulled apart, the main interest of the owners was the land, “says Yury Melkonov, editor-in-chief of the Baltic military-historical magazine Baltfort. 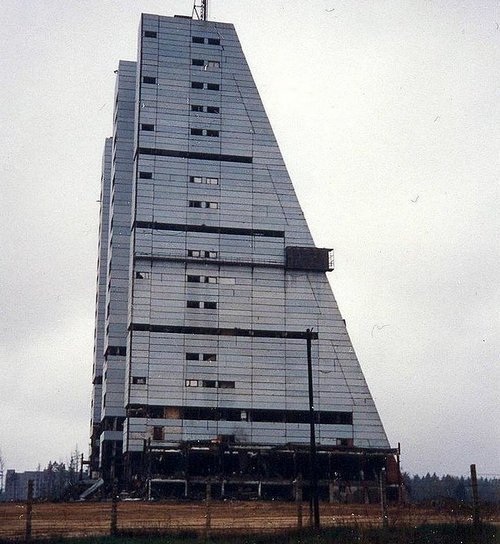 In 2017 in Latvia dismantled the Dvina R12 missile and nuclear base near the village of Tirza in the Gulbene region. It was a cyclopean structure of four underground mines thirty meters deep and a command center. An eyewitness who managed to visit there before the demolition, told in his blog: “We climb up.” A large, one-and-a-half-two-meter-diameter hole is gaping in the center, I can not believe that once here, literally from under my feet, escaped the sky is an unprecedented power.I come to the edge, wanting to look inside – an abyss, scary. ” He managed to penetrate the ground: “A lot of rooms, corridors, walkways.” In many places in the floor there are gaping depths of one or two floors, we step very carefully, checking the place for each step. “

The owner of the demolition company, Martins Malnieks, who was in charge of the demolition, said that there were twelve Soviet missile bases in total in Latvia, including five underground ones. All of them have already been destroyed, the object in the Gulbene region was the last. Malnieks complained about the complexity of the task: “This is a grand ten-story underground building, divided into several levels and built of very strong concrete.” They brought in special equipment: powerful excavators with hydraulic hammers and scissors for dismantling. The missile base was dismantled for six months. 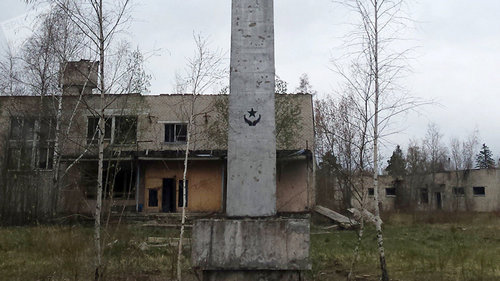 Only recently in Latvia they realized that former Soviet landfills are best used as tourist attractions. The Association of Rural Tourism compiled a map of such objects, it marked seventy places. The head of the association, Asnate Ziemele, believes that the legacy of the Soviet army should be put in order. “Maybe something will change now.” We are gradually attracting the attention of the public to how badly such facilities are being built and protected, because this is undoubtedly our history, and many are interested in the military legacy of the USSR, “Ziemele says.

Businessman Raivis Fedorovich, who bought a Soviet military bunker in the Riga district of Andrejoste, built a museum here. “I was attracted to such things from childhood, when I was watching TV in 1990. Bunkers and army bases then showed on the negative side that they were places of increased danger, contaminated objects, but I was very curious.” In two decades I fell out the opportunity to travel around these places. “As a child, he could not even imagine that there were so many of them,” he said. Among the exhibits of his museum are the old KGB mobile phone, an encryption machine, various gas masks, a military uniform.

In neighboring Lithuania, the Soviet military aerodrome Zokniai (near the city of Siauliai) has been used since 2004 for the needs of the NATO air patrol. In 2016, they announced the modernization of five sites, formerly owned by the Ministry of Defense of the USSR. By 2020, it is planned to completely rebuild the training grounds near the settlements of Pabrade, Gaizhunai, Kairiai, Kazlu Ruda and Roque.

The polygons inherited from the Lithuanian army were badly kept. They still have a large-scale reconstruction. Now everyone has an object in Kazloo-Ruda (60 kilometers from the border with Russia). There will be an airfield on which NATO aircraft will be able to work out ground-based strikes. The project involves the engineering division of the US Air Force Red Horse, funding is provided by the European Initiative for the provision of security guarantees (the European Reassurance Initiative, ERI).

In a number of cases, the Lithuanians ordered the Soviet military legacy more effectively than Latvians. In the 1960s, in the vicinity of the town of Plungė, the Plokštine (Plokštinya) missile base was built. In 1978, it was closed, the mines for the Dvina missiles were suspended in the framework of the treaty on missile disarmament and the reduction of medium-range missiles concluded between the US and the USSR. Since the 1990s, tourists have been brought here. After a decade they opened a full-fledged museum, recreated the internal situation of the Soviet missile base and the details of the life of servicemen serving it.

The visitor of the museum Artem Achkasov says in his blog: “The restoration of the base as a museum of the Cold War began in 2009 with a group of enthusiasts, all of this happening through the Internet at the forum of specialists on fortifications.” The Russian military responded to the call of the Lithuanian re-enactor, They helped in detail to reproduce the interior of the silo launcher, including military uniform and equipment, which is probably why the museum does not discuss the topic of “Soviet occupation”, but many About is told about a cold war “.

As the Lithuanian edition of the Express Week writes, in the city of Palanga, Soviet bunkers built more than half a century ago, local barns have long been turned into kitchen gardens and cellars. “In cold dark and dry dungeons, it is good to store vegetables and grow mushrooms.” According to experts, the historical value of Palanga bunkers is no less than that of Trakai Castle (the former residence of Lithuanian Grand Dukes. “- Ed.), But it would only be nice to bring them in the proper form, “the newspaper notes. 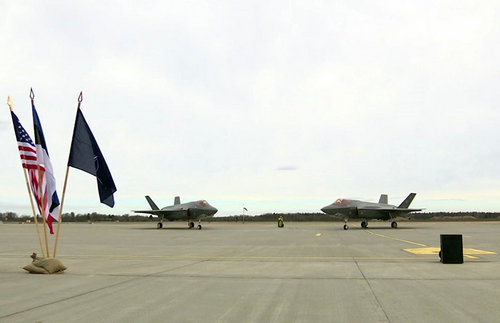 © AP Photo
Fighter-bombers of the fifth generation F-35 Lightning II on the air base Emari near Tallinn. April 25, 2017

In Estonia, the most famous Soviet military facility is the Emary air base, built in 1945. When the republic joined NATO in 2004, the base was reconstructed, and by 2015, there was already a multifunctional complex. Now the air patrol of NATO is based at the airfield, every six months the various countries of the alliance send their air links here.

By the way, they say that foreign pilots prefer Emari. This base attracts them not only by their proximity to Tallinn, but also by numerous amenities. For example, there are equipped golf courses, and the menu is designed in such a way as to please foreign guests as much as possible. Soviet pilots, once based here, did not even dream of such. 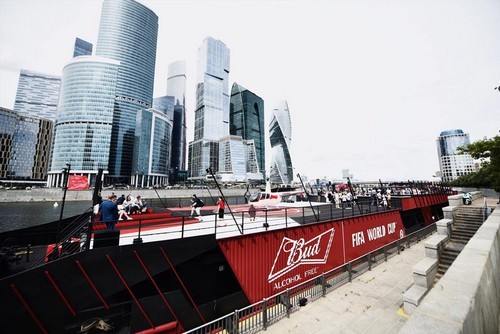