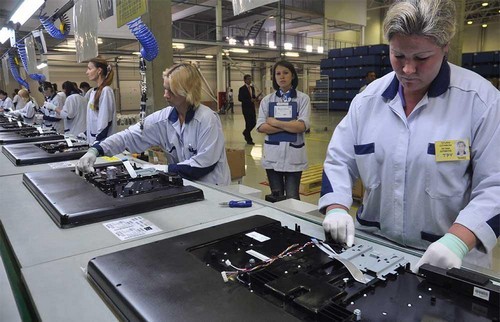 Among the most painful sanctions imposed by the West after Russia’s annexation of Crimea in 2014 has been the ban on selling tech to Russian companies, especially those in the military and energy sectors.

The Kremlin has responded by telling Russian companies to develop their own “made in Russia” technological solutions.

Despite the collapse of the Soviet Union and the shoddy state of the Russian economy today, Russia remains a world power when it comes to tech. It put the first man into space, while still under a totalitarian regime and military tech remains world class even today.

At the same time, thanks to the traditional emphasis on the “hard sciences” in Russian higher education, the country remains in the vanguard of software development.

Several tech companies are rising to the challenge. Based in the Russian cities of Saratov, Penza, Perm, Saint Petersburg and Moscow these companies have received more than 15 billion rubles ($256mn) from the state budget to develop alternatives to western technologies.

The Economic Development Ministry has concluded six public tenders “for the research and development of several projects within the framework of the Federal Target Program No.1”. The aim of the program is to realize the state economic and social policy when solving long-term tasks and large infrastructure projects, according to the Ministry’s website.

The six tenders were awarded to companies whose task is to replace tech which so far has been imported from America and Europe. This primarily concerns technology needed for the development of the Russian military-industrial complex.

In total, 77 foreign technologies are on the list of foreign tech the Kremlin wants to replace with a homemade equivalent.

The Ministry is particularly interested in the reproduction of ultra-high-frequency and pulse transistors of the kind made by the American companies Cree, Microsemi and Integra and the Japanese Sumitomo Electric and Fujitsu. The Russian companies were also tasked to reproduce optical cables, lasers, chip resistors and switches made by American companies such as Gooch&Housego or Schneider Electric.

Most of these contracts have been awarded to research institutes and private companies based in Moscow and Saint Petersburg.

For example, the Saint Petersburg-based National Research Institute “Electron” received 265 million rubles to develop a series of photodetector arrays for high-precision optoelectronic systems, which are used for night vision surveillance systems. The final product is supposed to resemble the technology developed by the American company Fairchild Imaging.

Although details of each of the tenders has been made publicly available by the Ministry, information concerning the individual contracts fall under the State Secrecy Law, and their discussion with third parties is possible only with the permission of the Ministry.

The plan is not only to use the technology domestically but also to export it to foreign markets.

In December after his annual press conference, Vladimir Putin met with the representatives of the Russian military-industrial complex in the State Kremlin Palace. During the meeting, Putin said that the Russian government “invested in the military sector a lot of money – three trillion rubles.”

This money “should not only help maintain Russia’s defense capability but also to enable Russian companies conquer both Russian and foreign markets with high-tech civilian products.”