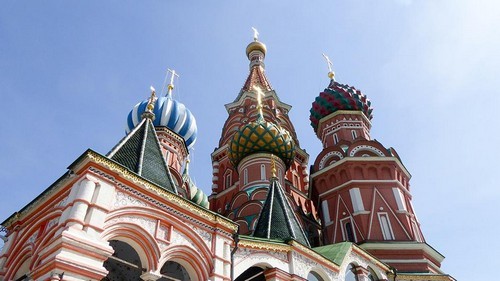 “Come to me, brother, in Moscow.” With those words written in 1147 by Prince Yuri Dolgoruky to his cousin, the history of Moscow began.

At the time, Moscow was nothing more than a small trading post located on a high bluff at the intersection of two rivers: the Moscow River and the Neglinnaya. Over the next centuries, the trading post grew into the home of local Prince, church, local residents and merchants, and the wooden fence around it was replaced by taller brick walls. By now it was a proper fortress, or rather the Russian word for a fortress: a kremlin.

Today it is surrounded by the same crenelated walls built in 1485-95 dotted with 20 towers and still houses the residence and offices of the country’s leader. But visitors can enter the Kremlin to see two extraordinary museums and the ceremonial heart of Russia.

You enter the Kremlin from Manege Square, through the squat white Kutafya Tower over a bridge – once spanning the Neglinnaya River, now mostly underground – and through the Trinity Tower, which at 80 meters is the tallest of the wall towers. To your right is the modern Palace of Congresses, now a concert venue; on your left are presidential administration buildings. 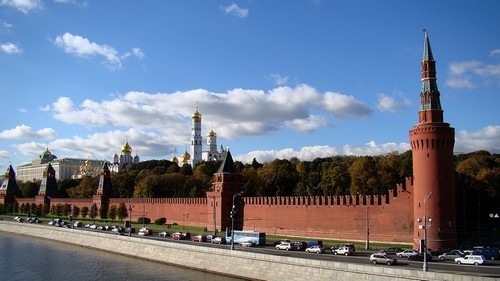 The heart of the Kremlin is a vast square surrounded by churches, residential palaces, and the Ivan the Great Bell Tower with its 21 bells. This is where official and religious processions and ceremonies are held, and where every Saturday at noon you can watch the Kremlin Horse Guard strut, twirl and canter.

Each of the magnificent churches has a particular function. The enormous and rather stolid Dormition Cathedral (1479) was where every tsar, emperor and empress was crowned from 1498 until 1896, when Nicholas II was crowned as the last leader of the Romanov dynasty. The magnificent 5-tiered iconostasis (a wall of icons at the altar), frescoes and royal thrones were reconstructed after Napoleon turned the church into a horse stable during the War of 1812. It is the final resting place for religious leaders.

The Church of the Archangel Michael (1509), with its Italian-style scalloping, was the burial place for Russian tsars and their families from 1505 to 1696, when Peter the Great moved the capital of the Russian empire to his newly built city on the Neva River, St. Petersburg. Royalty was interred in the northern capital until the 1917 Revolution.

The Annunciation Cathedral (1489) is tiny – it was the family church, where the royal families were married and baptized, and where they attended church services.

The other buildings are part of the palaces and ceremonial rooms still used today by the presidential administration. Just outside the square are two huge, never-used symbols of Russian size and power: the 40-ton tsar cannon, which was forged in 1586 and never fi red; and the 200-ton tsar bell, which had a 11-ton chunk break off when it was still in the casting pit.

For a full tour of Russian imperial splendor, visit the Armory Chamber Museum, which is filled with crowns; weaponry and armor; gift s and tableware of gold, silver and china; clothing (including the huge boots of Peter the Great) and ceremonial dress; carriages, and even some of the fabulous Faberge eggs. The Diamond Fund is much smaller but has a jaw-dropping collection of imperial jewels and jewelry, gemstones and gold. 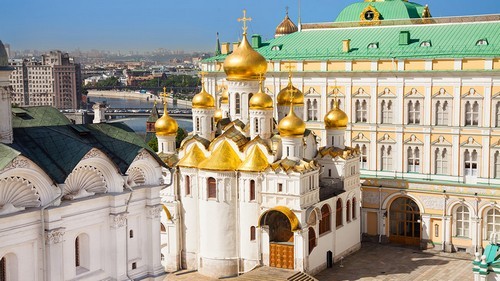 For the most impressive first view of Red Square, enter from Manege Square (at the end of Tverskaya Ulitsa). Walk past the “0 Kilometer” marker from which all distances were once measured – dodging coins tossed by visitors to ensure another trip to Moscow – and through the Iberian Gates (torn down by Stalin in 1931 to let tanks onto the square and rebuilt in 1996).

Another “new” old church is the first structure you see on your left : the small Kazan Cathedral, originally built in 1636 and torn down by Stalin exactly 400 years later in 1936. The present church was built in 1993, but inside it feels ancient.

Th en as you walk up a small incline, before you is Red Square, or rather Beautiful Square (the word “krasny” in Russian meant both pretty and red) bounded by the Kremlin on the right, GUM department store on the left , the red brick Historical Museum at your back, and across the square – St. Basil’s Cathedral.

Until the 20th century, the huge expanse – 700 x 130 meters, or more than 10 football pitches – was always a bustling market, founded when it was getting too crowded inside the Kremlin and merchants were sent packing.

It was covered with hundreds of wooden stalls, shacks, and little buildings, fi lled with the sound of vendors hawking their wares and the scent of pastries and tea, old vegetables and waste, and thousands of bustling, gossiping, hustling people.

In the center of the square is a round stone platform called Lobnoye Mesto (high place). Here proclamations were read, the tsar appeared before the people, and the heirs to the throne were shown off. Contrary to popular belief, there were no executions on this spot. 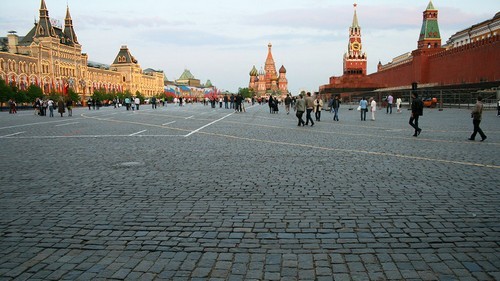 In the middle of the square up against the Kremlin walls is the black and red stone mausoleum where the remains of the Bolshevik leader Vladimir Lenin perpetually lie in state. The originally wooden housing was replaced with this constructivist marble structure in 1930. Lenin was joined by Josef Stalin from 1953 until 1961, when reformist leader Nikita Khrushchev had him removed and interred behind the mausoleum with more than 400 other Soviet and foreign luminaries. The roof is still the viewing platform for officials during the grand parades through the square.

The line forms in Alexandrovsky Gardens by the sign (in English); visitors go through a metal detector and must leave their bags in lockers. Photography is strictly forbidden. Visitors must be quiet, keep hands out of pockets, and men must not wear hats.

Across from the Kremlin is the fanciful GUM department store, opened in 1893 as one of a cascade of three indoor markets. With its glass roof, fountains and decorative wrought iron, it was the place for high-fashion shopping. After a rather dreary incarnation during the Soviet period, it is once again a fashionable place to shop. Be sure to try the famous ice cream cones (rich vanilla or crème brûlée), try Soviet cafeteria-style food in Stolovaya Number 57, or have drinks and a snack at Bosco’s. 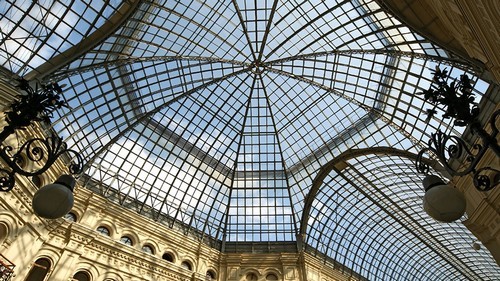 If you are a history buff , be sure to stop in the State Historical Museum, built in 1872 to showcase the royal collection, which tells the history of the country from the Stone Age to the present. The rooms, lavishly decorated in the styles of various periods, are as fascinating as the exhibits. This summer there will special shows on the writer Ivan Turgenev, Emperor Alexander II and Nicholas II (from July), and “The Russian Sheffield” – the Pavlov factory that made silverware and knives (from July).

The far side of the square is dominated by St. Basil’s Cathedral. Built by order of Ivan the Terrible to commemorate victory over the Tatars in 1552, it is called the Church of the Intercession on the Moat. It was named in honor of the church feast day that the battle took place on, and it’s “on the Moat” because from 1508 until 1814 a moat ran along the Kremlin wall on Red Square. It is commonly called St. Basil’s in honor of Basil the Blessed (1468-1552), a poor and homeless holy man interred in a chapel built on the site. The church is really nine small chapels – one under each of the eight cupolas and tent spire in the center, linked by passageways painted with floral or geometrical ornamentation. In front of the church is the monument to Minin and Pozharsky, who led the army that drove out Polish invaders in 1612.