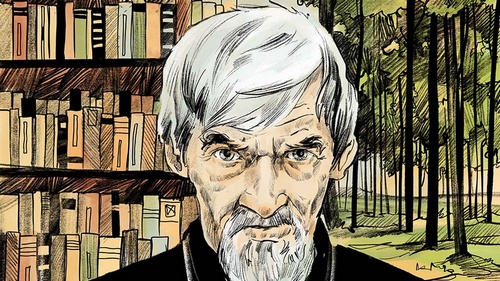 Yury Dmitriyev normally hates Moscow. The concrete, the commotion, the pollution. As much as he can, he stays in Karelia, where he was born, raised and has spent his 62 years. In the northwestern region bordering Finland and the Baltic and White Seas, he can usually be found in the woods or in his study, writing.

Yet on a pleasant evening in mid-May, Dmitriyev, a prominent researcher of Soviet crimes, was happy to be in the metropolis. Accompanied by his elder daughter, Yekaterina Klodt, and his lawyer, Viktor Anufriyev, old friends greeted him with grins and tight hugs in a courtyard outside Teatr.doc, a progressive theater, ahead of a human rights awards ceremony.

One month earlier, Dmitriyev had been cleared of child pornography charges. Authorities had detained him in December 2016 after investigators found nude photos of his 11-year old adopted daughter; Dmitriyev said he took the photos to monitor her physical changes as she was prone to illness. From the outset, human rights defenders claimed that the case was fabricated to silence an outspoken activist.

If the arrest came as a shock to those who knew him, so too did his acquittal: Fewer than one percent of criminal defendants in Russia are cleared.

But authorities, human rights defenders now say, weren’t done with the historian just yet. Only a month after the awards night, a judge annulled the April decision, starting the trial anew.

Then, two weeks later, prosecutors brought additional charges to the table: This time they claimed that Dmitriyev had sexually assaulted his daughter. As of late June, the historian was back in jail facing another uphill legal battle, his freedom having been fleeting.

“The new charges are a chance for the prosecution to get it right,” Anufriyev said. “They failed the first time, so officials are giving them another chance to get the job done.”

Two decades ago, Dmitriyev discovered a set of mass graves in a Karelian forest containing the bodies of more than 9,500 victims of Josef Stalin’s Great Terror. Poring over KGB documents, the head – and sole employee – of Memorial’s Karelia branch spent the next 20 years documenting each victim’s story.

“What makes Yury unique is that he combines both the digging and the documenting,” said Sergei Krivenko, a colleague of Dmitriyev’s at Memorial and a member of the Presidential Human Rights Council. “Some people work on compiling books of names, some people search for the exact locations of the killings. No one has dedicated themselves to both the way Yury has.”

No one has dedicated themselves to both digging and documenting the way Yuri has.

Those who know Dmitriyev say he toiled everyday. “He’s been doing this work for the past 30 years, and I’m 33,” said Klodt, his elder daughter. “I’m so used to it that, for me, his work is no different than a dentist’s.”

Since the fall of the Soviet Union in 1991, historians say, the state has supported them in locating and memorializing the burial sites of the estimated 15 to 30 million victims of Stalin’s rule. At the location Dmitriyev discovered – Sandarmokh – local authorities helped build roads and erect monuments and aided with an annual gathering at the site.

But in recent years, human rights defenders say, the climate has become less hospitable. Those who spoke with The Moscow Times pointed to a resurgence in Stalin’s popularity as a significant reason: In June last year, Russians voted him the “most outstanding” person in history. In second place was President Vladimir Putin, who has accused the West of “excessive demonization” of the Soviet leader.

Others pointed to a surge in nationalism since 2014, when Russia annexed Crimea and got involved in Ukraine. “There were many foreigners killed at Sandarmokh – Norwegians, Poles, Finns and Ukrainians, including around 200 intellectuals,” Krivenko said. “This is a very important place for Ukrainians especially, and a delegation would visit the site annually.”

Dmitriyev organized the memorial visit every year on Aug. 5. He invited foreign delegations and led discussions, Krivenko said. After the events in Crimea and Ukraine, the discussions often turned to politics.

“I think this is why they went after him,” Krivenko said. He also pointed to an October 2016 decision to add Memorial to a register of “foreign agent” organizations that receive foreign funding. “I think this gave the local siloviki” – officials with ties to law enforcement – “a signal that they could go after us.”

Prison as a work trip

The day after the awards night, Dmitriyev was invited to speak with human rights students at the Sakharov Center, named after the Nobel Prize-winning human rights activist.

Klodt had come with him and complained that she wasn’t feeling well. “Maybe they should put you in prison for a year too so they can toughen you up,” her father joked.

Quick to laugh, thin and slightly disheveled, Dmitriyev presented an unimposing figure. But when the subject of his work came up, he turned deadly serious.

“I don’t fight the system. That’s a dead end, and I’m already old now,” he told The Moscow Times before the event. “I fight for memory. I fight so anyone who wants to can learn about their relatives, regardless of whether the government wants it or not. These people existed at some point. They worked and loved and had children. I’m for protecting the freedom of private life and of those memories.”

Without those memories, Dmitriyev continued, today’s generation cannot judge whether their government is laudable or acting improperly.

The people I dig up were in the same prison, walked the same halls and were behind the same bars.

“When a person knows the history of their family for multiple generations, they can understand what our state is doing right and what it’s doing wrong,” he said. “Called upon by the state to do this or that, they’ll say, ‘No, my great-grandfather was summoned in the same way and it ended badly for him. So maybe it’ll end badly for me as well.’”

Dmitriyev shrugged at the subject of his time in prison. “I don’t make a great tragedy out of that year,” he said. “I just think of it as a work trip. I’ve gained a better understanding of what my heroes – the people I dig up and write about – were thinking. They were in the same prison, walked the same halls and were behind the same bars.”

More difficult, he said, was being separated from his younger daughter. Dmitriyev himself was adopted, and at some point he decided he wanted to care for an orphaned child too. He hoped he’d be able to talk to her again by the end of the year. “It’s a humane policy by the prosecutor’s office,” he joked. Then he turned serious again: “I can handle it, I’m a tough person. But what about the child? She thinks everyone has abandoned her.”

Anufriyev, Dmitriyev’s lawyer, believes that local authorities pressured her into writing the letter. He also says that the new charges of sexual assault are founded solely on a June 6 meeting between investigators and the girl during which, Anufriyev says, they coerced her into saying what they wanted. “They say they’re helping the child, but really they’re making her suffer,” he said.

Why It Is Our Duty to Free Oyub Titiev (Op-ed)

On July 25, the retrial of the first case will begin. The Investigative Committee is currently researching the new charges, a process which could take months. The original charges carry up to 15 years in prison; the new charges up to 20.

This time, though, Anufriyev says Dmitriyev is better prepared. “After his last stint in prison, he now knows that we can fight and win this thing,” he said.

Klodt, too, is ready for the fight. “I’m not constantly hysterical like last time,” she said. “I understand that something needs to be done. I’m not giving up.”

His colleagues say they won’t give up either. When Dmitriyev was first arrested, human rights defenders, artists and writers across the country spoke out for him and wrote letters to Putin. Still, they are sober about the possible outcome.

“This is the atmosphere for us right now,” Krivenko said. He pointed to the case of Oleg Sentsov, a Ukrainian filmmaker accused of terrorism after he had refused to accept the annexation of Crimea, and Memorial colleague Oyub Titiev, who is also in prison on charges widely believed to be fabricated.

“The only good thing from all this is that the president is showing us how it all happened in the 1930s – how people were blamed, how siloviki read signals from the top,” Krivenko said. “We used to study this in archives, now we see it in real life.”

During his short stint out of prison, Dmitriyev returned to work. Anatoly Razumov, a historian and one of Dmitriyev’s closest friends, stayed at his house from the night before the acquittal was overturned until June 19. The entire time, he says, Dmitriyev worked on a book he had to put off when he was first arrested.

In May, asked if he would return to his work or if he feared doing so would anger certain parties, Dmitriyev was unmoved. “If you’re afraid of wolves, you shouldn’t go into the forest,” he replied.