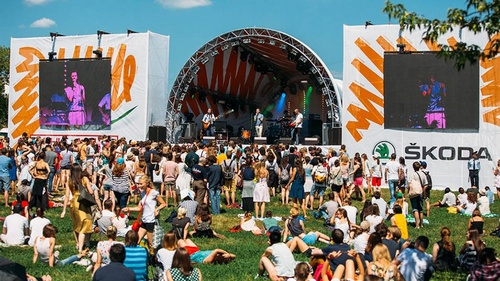 Now that the World Cup is over, it’s time to plan for the rest of the summer! And what better way to spend a weekend then at one of the best two Moscow music festivals? Park Live and Afisha Picnic are coming up soon – get your tickets in advance!

Park Live is a relative newcomer to the festival scene. It was launched at VDNKh Park in 2013 and then moved around the city to various venues, including Otkritie Stadium. This year Park Live will once again be held in an actual park, and the best-known one at that: Gorky Park. The festival will last three days and feature three major headliners, one for each day.

On July 27, you can dance to the music of French DJ David Guetta, a true EDM and house veteran, who’s been around for sixteen years. Another prominent musician included in the first day’s line-up is Ivan Dorn, immensely popular singer-songwriter from Kiev, whose music ranges from house to hip-hop and from mainstream pop to jazz.

Day two will feature the world’s most successful virtual band, Gorillaz, along with the Swedish singer-songwriter Tove Lo, the Icelandic indie band Kaleo, and the Russian folk-rock group the Hatters, whose lyrics make fun of contemporary Russian culture.

The final day of the festival is headlined by the British trip-hop veterans Massive Attack. Their long-time collaborator and fellow trip-hop pioneer Tricky will be performing earlier that day, as well as Young Fathers, a popular Scottish hip hop group, who just released their third album, “Cocoa Sugar.”

More info and tickets at the Park Live site.

Afisha Picnic, one of the oldest and largest Moscow summer festivals, will take place at its traditional spot in Kolomenskoye Park. This year’s headliner is the Canadian indie rock band Arcade Fire, which has won international acclaim, Grammy awards and an Oscar nomination. Their latest album “Everything Now,” released last year, received polarized reviews, but was loved by fans nevertheless.

Zemfira, one of the most popular musicians in the country, headlines the Russian language line-up, which has always been equally important at Afisha Picnic.

Apart from Zemfira, the Russian music scene will be represented by Delfin (Dolphin), a rapper turned poet and electronic musician, and Pharaoh, probably the most successful rapper of the younger generation.

The Russian indie music line-up features Pasosh, whose upbeat post-punk is reminiscent of the bands like Green Day and Offspring, Monetochka, who plays self-invented “psychedelic cloud rap” with ironic lyrics about a teenager’s life in today’s Russia and Aigel, an electronic hip-hop duet from Tatarstan.

Afisha Picnic can also boast the best food stalls Moscow has to offer, as well as a lively local designers market.

More info and tickets at the festival site.