A homeless hostel in Salisbury that housed one of the victims of the latest novichok poisoning has been evacuated amid increasing nervousness in the area.

All 20 residents of John Baker House were told to pack a bag and leave the building at around 10.25am on Thursday.

Later the street outside the hostel was also cleared of vehicles as police erected barriers to cordoned off a block. 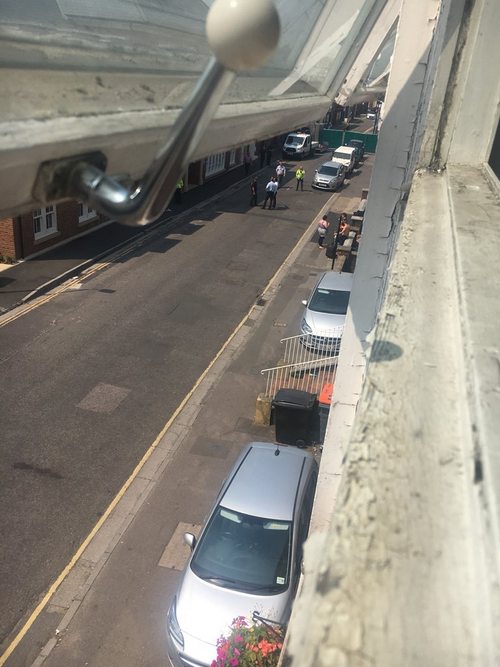 The hostel is home to Dawn Sturgess, who is being treated in hospital with her partner, Charlie Rowley, after being exposed to the nerve agent.

Collette Boys, one of the residents, who knows Sturgess and Rowley, said police had also cordoned off a public bin outside the hostel.

She said: “None of us know what’s going on. No one is telling us anything. The minute they went in hospital we should have been told.

“We were knocked up about 10.25am this morning to get out the building. It is very scary to think there is something in that building that we could have been breathing in.

“They’ve cordoned off a public bin outside John Baker. So I’m not sure what’s going on. I asked yesterday what it was about and the two police officers that were there didn’t have a clue.”

Boys said she last saw Sturgess at the hostel at the weekend, but hadn’t seen Rowley there “for about two weeks”.

Boys’s partner, Ben Jordan-Venning, who was staying with her when the hostel was evacuated, said: “They said we’re being evacuated, ‘there’s no alternative, bag your stuff’.”

Jordan-Venning, a former resident of the hostel who was also friends with Sturgess and Rowley, said: “I used to lend her tobacco and money and let her use my phone. And I used to got out with Charlie for a few beers.”

He said he was surprised that residents of the hostel had not been offered medical check-ups. “I thought we would have a medical team to check us all out, but there’s been nothing like that.”

Sanctuary Group, which runs the hostel, has been contacted.