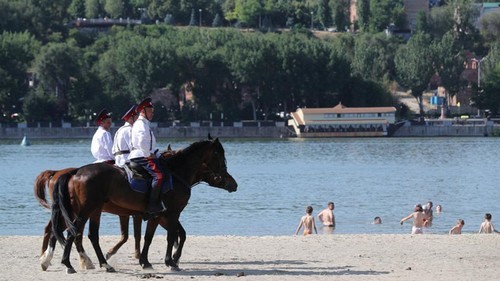 Police in Russia’s Far East have reportedly summoned a local official to reprimand him for riding a horse to work in protest of recent increases in gas prices.

Mikhail Puchkovsky, a regional lawmaker in Kamchatka, said he was forced to ditch his car after local gas stations raised fuel prices by as much as 10 percent last month. Rising fuel prices in Russia were among the first topics to be addressed on President Vladimir Putin’s annual call-in show this month.

Puchkovsky was filmed on Wednesday riding to his administrative building on horseback, where local media reported a security guard prevented him from tying the animal to a stand.

“As soon as I came to the session, I immediately received a summons to appear at a trial for an administrative offense,” he was quoted as saying by the state-run TASS news agency.

On Thursday, the regional deputy said he planned to ignore the summons.

Cost of Russia’s ‘Power of Siberia’ Gas Pipeline to China Balloons to $9.7 Bln

Puchkovsky said he plans to continue riding into work on horseback on behalf of other Russians also feeling the squeeze from a rise in the cost of living.

“With an increase in VAT value-added tax, these will be cosmic prices and Kamchatka will be on the brink of survival, especially the pensioners,” he told Interfax.

Light Up the Moscow Night with a Run