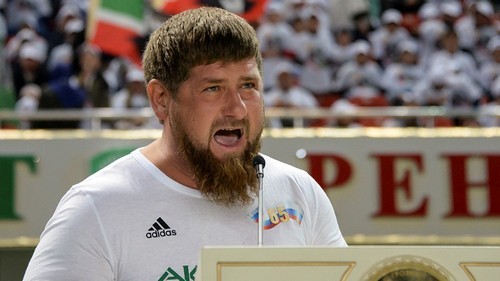 The leader of Russia’s Chechen republic has granted honorary citizenship to Egypt’s star striker Muhammad Salah during a farewell banquet held in the team’s honor.

Human rights groups criticized Salah earlier this month for a photo-op with Chechnya’s strongman leader, Ramzan Kadyrov, who is accused of human rights violations and rules over the region with an iron fist.

Critics say Kadyrov, whois hosting the Egypt team in the regional capital Grozny,has used the World Cup as a propaganda tool to boost the Chechen leader’s image in the Muslim world.

Russia Tells UN There Are No Gays in Chechnya

“Muhammad Salah is an honorable citizen of the Chechen republic! That’s right! Tonight I signed a decree to grant this high title to the great footballer of Egypt andLiverpool,” Kadyrov wrote in a statement on the Vkontakte social media network.

At the dinner, Kadyrov granted Salah a copy of the decree and a badge.

“It’s a deserved title! Thousands of children, youth and elderly people got the opportunity to see one of the greatest players in the world and to interact with him,” Kadyrov explained.

According to the Chechen president, Salah thanked him for his hospitality and for the excellent living and training conditions in Grozny.

Answering criticism that he was using Salah to raise his own image last week, Kadyrov said, “I didn’t invite Muhammad Salah or the Egyptian team. We created the conditions and they chose our region.”

“Ask FIFA and UEFA the questions, they were in charge of it, not me,” he was cited assaying by the Chechnya Segodnya news outlet.

Light Up the Moscow Night with a Run