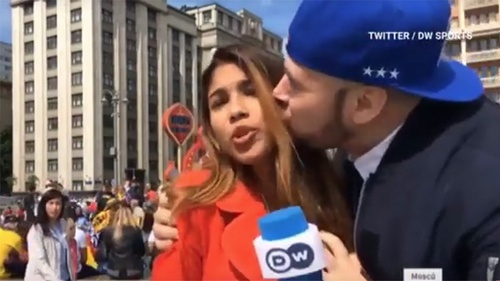 More than 30 female journalists have been harassed while reporting on the World Cup this summer, the head of an anti-discrimination group revealed Wednesday.

Despite fears leading up to the month-long tournament, no incident of terrorism or fatal violence has been recorded so far. World Cup officials have, however, declined to publicly recognize fights and sexual harassment during the tournament.

The Football Against Racism in Europe (FARE) network said they have flagged at least 30 cases of female reporters being accosted on air, 15 of which have been made public.

Meanwhile, FARE executive director Piara Powar said the organization identified 30 cases of sexist behavior by fans on the streets, with the real number likely even larger.

“That’s clearly an underestimation. I would say perhaps that the real figure is that times 10,” Powar said at a press conference, noting that many incidents are left unreported.

The Dark Side of the ‘Street of Lights’

No complaints were received from ethnic or sexual minorities about discrimination in the first three weeks of the tournament, Powar told reporters.

“The Russian people themselves have played a magnificent role making people feel welcome. Many people have been surprised,” said Powar.

The head of sustainability and diversity for FIFA, the football governing body, stressed at the press conference that widely publicized concerns of discrimination ahead of the June 14 to July 15 World Cup didn’t materialize.

FIFA formed a complaints mechanism for rights activists and journalists for all FIFA-related activities weeks before the tournament kicked off in Moscow.

“There might be one or two, or few, cases where things did not go the way we planned for,” Addiechi said. “But if we bear in mind that we have 1.5 million Fan IDs distributed with over 700,000 international guests coming to Russia, the numbers of incidents we’ve experienced have been very low.”

Inside a Moscow Art Studio