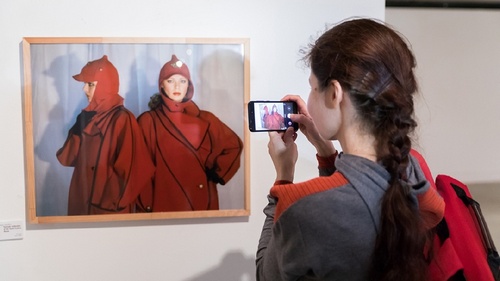 On June 21, the “Youth Uniforms of Moscow” exhibition opened at the Museum of Moscow. The exhibition includes 17 installations made by contemporary artists trying to show how the Soviet subcultures of the past look today. It also features photographs by Igor Gavrilov of young people and youth movements in the last decades of the Soviet Union. According to the exhibition’s director, Alyona Saprykina, this exhibition shows a lot about Moscow and its past, to the benefit of both people living here and tourists visiting for the World Cup.

“From the perspective of the Soviet youth, everything that was happening at the end of the 20th century was very memorable and bright,” Saprykina told guests during the opening of the exhibition. “Not only politics and our life had changed, but civilization itself had exploded.”

The photographs and installations are dedicated to the youth subcultures that existed in Russia from the 1970s until the early 90s. Student subcultures and movements began making waves first in Western Europe, largely culminating during student protests in France in 1968. But in Russia youth movements flourished and quickly grew much later, during the time of perestroika. As the repressions of the Soviet past began to slip away, the doors opened to a brighter future. It was a hopeful period with a general belief that the time for the democratization of society had finally come. 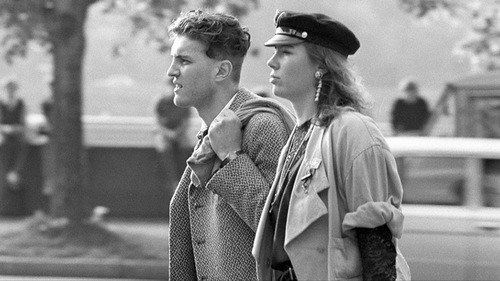 As a photographer during perestroika, Gavrilov focused on young people and their various subcultures. Visitors of the exhibit can see his photos of punks, rockers and bikers. One photo, entitled “I Will Recognize My Darling Through Her Shoes,” shows a woman wearing biker shoes. Another, called “A Stylish Couple,” shows the punk-rock hairstyles of two young people.

Gavrilov’s photos also depict cultural events such as the first international competition for hairdressing, a bikers’ congress, a May Day demonstration and the opening of the first McDonald’s in Russia on Pushkin Square. Rock music very much conveyed the mood of Soviet youth during the period, and so we also see a photo from a Viktor Tsoi concert. There are also photos of the everyday life of the Soviet people at the time: life in a communal apartment, for example, or a young family on a neglected playground in the 1970s.

“These photographs are not meant to mock their subjects. There is no need for it,” Gavrilov said during the exhibition opening. “Photographers should love life, love themselves and the people that surround them, and take photos truthfully.” 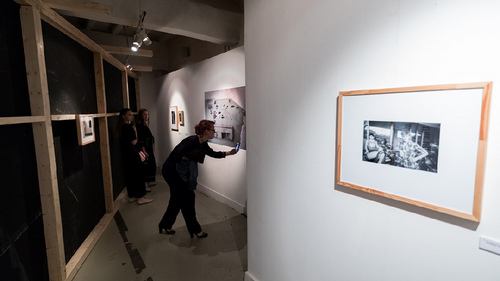 There are not many obvious connections between the photographs and their epoch and the contemporary items on display at the exhibition. Irina Korina is one of the artists who provided some of the installations. One is called “Swinging Shakespeare.” Some scholars believe that Shakespeare was not one single poet and playwright, but a collective of writers whom we will never know. This installation suggests that anyone can get inside the head of Shakespeare and discover the truth about the poet.

Another work by Korina at the exhibition focuses on Leo Tolstoy and the distribution of flyers with the writer’s challenge to the elite and to the Russian Orthodox Church.

Accessories are an important factor in the fashion styles among the photographs at the Museum of Moscow. Unique modern accessories are also on display, many of them made by the artist Daria Bulatova. There are items made from orange peels, cypress cones, cigarettes and clothespins – even earrings made out of headphones and nuts.

“There are really many things around us that can be used as accessories,” Bulatova said. “It seems to me that not only gold and silver accessories should be valued. Simple objects also have their value.”

The “Youth Uniforms of Moscow” exhibition runs through Aug. 20.

The Dacha Diaries: At the Grill