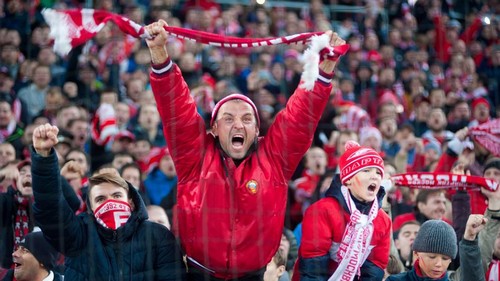 Racist and homophobic incidents are on the rise in Russian football ahead of the 2018 World Cup, according to a report published by the FARE network and the Moscow-based SOVA Center on Wednesday.

The report notes an increase in the number of racist and homophobic chants inside football stadiums in the past season, including monkey chants directed at black players, neo-Nazi songs, anti-Caucasian chants and homophobic slurs.

“This is a practice that takes sustenance from state-led homophobia, but has been copied from leagues in Western Europe,” the report says.

Despite the rise in racist and homophobic chants, the total number of discriminatory incidents – including the use of far-right banners and physical violence – has continued to decline, according to the report.

Meanwhile, hate crimes carried out by Russian far-right football fans remain a problem, with two cases recorded in the 2017-18 season, including an attack on a group of Iraqi students in Oryol.

“There is reason to hope that during the 2018 FIFA World Cup, the authorities will not allow serious violent incidents involving football hooligans to take place,” the report says.

“However, we do not have as much confidence in the prevention of non-violent racist incidents, despite the many well intentioned reassurances.”

The data in the report was collected between June 2017 and May 2018 using public sources, closed discussion groups and online fan forums, and covers professional football competitions, including Russian clubs in the UEFA Champions League and Europa League and Russian Football Premier League games.

Military expert: Su-57 will be one of the most powerful machines in the world