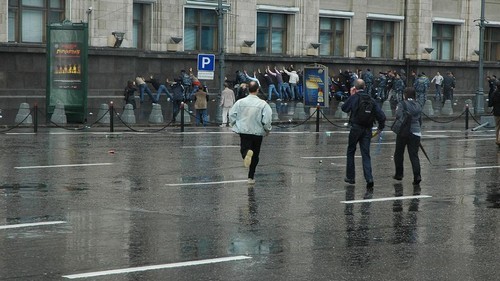 A top Russian court ruled that authorities cannot deny protesters permission to gather in public just because they may be a nuisance to others.

Municipal administrations across Russia have regularly used various provisions of the Administrative Code to deny permits, as well as to fine or jail protesters. Most recently, the Kremlin passed a new order to restrict protests for the duration of the football World Cup, underway in 11 Russian cities until July 15.

Nearly 90% of Russians Are Unwilling to Protest, Poll Says

“A public authority’s assumption of a possible inconvenience cannot be a valid reason for changing the place and (or) the time of a public event,” the Supreme Court said Thursday.

A potential loophole in the ruling allows local leaders to reject permits if they run aground of any laws regarding road safety or transportation requirements.

The court also said several single-person pickets could be considered one demonstration if prosecutors can prove in court that they share the same organizers and goals, and “geographically gravitate toward each other.”

Venice Comes to the Pushkin Museum

World Cup Stewards to Be Disciplined Over Pussy Riot Protest