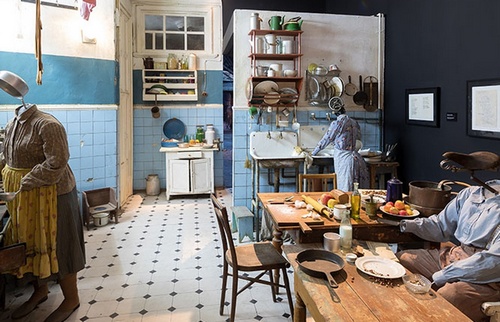 “Hallways. Seven Worlds of Vysotsky” is a new exhibition at the Jewish Museum and Tolerance Center dedicated to the late singer and actor Vladimir Vysotsky, considered to be among the most brilliant poets of post-war Soviet Russia. The exhibition is the first in a series dedicated to the lives and art of prominent Jewish figures.

Vysotsky’s family on his father’s side came from the Brest region of contemporary Belarus. Allegedly, the poet’s family name is derived from the name of the settlement Vysokoye. Even though Vysotsky’s Jewish heritage has never been a significant theme in his poetry and songs, he acknowledged it in one of his poems: “A family of Jews, they dwelt in Rome / Vysotsky, known nowhere else but their home.”

Vysotsky would have celebrated his 80th birthday this year. He died in 1980 at just 42 years old. A singer-songwriter, poet and stage and screen actor, Vysotsky had an enormous and lasting effect on Soviet and Russian culture. A recent biopic “Vysotsky: Thank God I’m Alive” (with a script by his son) provoked controversy because of the way it presented the artist – who is still idolized today – by largely focusing on his drug and alcohol problems.

Little is known about Vysotsky’s personal life despite his immense popularity in the Soviet Union. Since he often sang in the first person, his fans assumed his songs represented his own experiences. But they didn’t always. Contrary to his songs’ subjects, Vysotsky never took part in World War II, never served time in a prison camp and never even sailed a ship. His songs took place in worlds created by their author, but they felt so authentic that his listeners often mistook them for the real thing.

The idea behind “Hallways. Seven Worlds of Vysotsky” was to show some of these worlds and explain their roots. The exhibition is literally a sequence of hallways, each symbolizing a certain theme in Vysotsky’s poetry. Visitors will be able to walk from one hallway to another and see replicas of a Moscow communal apartment, a World War II trench, a Moscow alleyway, a mental hospital and a typical Soviet pub. The experience is similar to immersive theater. All the items are authentic: furniture, cutlery and clothing – there’s even fresh food in the kitchen. You can touch most of the items and even open drawers in a cupboard.

“Hallways” tackles just one aspect of Vysotsky: his poetry. The exhibition only briefly mentions his work as an actor or his tumultuous personal life in the section devoted to the artist’s biography. The poems escort you along the way. Handwritten and typewritten drafts are displayed on the walls, while the headphones’ recording explains the visuals provided within the “hallways.”

In every hallway there’s background information explaining why this or that theme appeared in Vysotsky’s oeuvre. The communal apartment tells the story of the poet’s childhood; a dangerous alleyway refers to widespread crime in Moscow after World War II; and the psychiatric ward is Vysotsky’s reflection on the U.S.S.R. as a whole.

The exhibition is the brainchild of Yan Vizinberg, the creative director of Lorem Ipsum, the company that participated in the creation of multimedia installations for the Yeltsin Center in Yekaterinburg and Zaryadye Park in Moscow. To produce the exhibition, he gathered a film crew. Production designer Andrei Ponkratov, who worked with Andrei Zvyagintsev on “Leviathan” and “Loveless,” served as the art director; while cinematographer Vladislav Opelyants, known for working with embattled director Kirill Serebrennikov on his last two movies, “The Student” and “Summer,” was the lighting designer.

After exhibiting at the Jewish Museum and Tolerance Center, “Hallways. Seven Worlds of Vysotsky” will tour Russia and other former Soviet countries. It runs through Sept. 23.