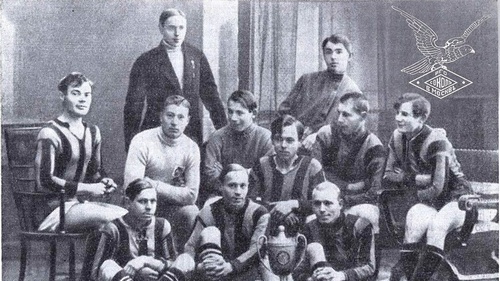 We’ve come a long way since 1893 when the first football match was played on Russian soil, squeezed in between tug-of-war competitions and horse races. The game aroused only laughter and confused questions. Who would want to roll around in the mud wearing white? The answer at first was simple: only the British citizens who brought it over.

In its earliest beginnings, football existed in Russia only as groups of homesick British expats waiting by the Petersburg docks for crews of ships arriving from Britain to provide enough men for opposing sides.

The man who transformed football from an imported oddity into a national sport was a Scotsman, Arthur MacPherson, who became the founder and president of the All-Russian Football Union from 1912-13.

In the pre-Revolutionary era, football was first embraced by Russian factories, which formed teams for their workers as a way to distract them from drinking vodka on weekends. But the Orthodox Church, already suspicious of the possibly harmful influences of this decadent European pastime, was scandalized to see men running around in shorts. The first Russian players had to make their own shorts instead – which reached down to their ankles.

Immediately after the 1917 Revolution the tide turned against this “bourgeois” sport. Clubs were seized and transformed into public services and tearooms. MacPherson himself was arrested in 1917. Two years later his body was found under a pile of 40 others in a Moscow prison.

After the initial anti-bourgeois campaign died down and the Soviet government began to promote sports, football became a form an entertainment for workers. Each government department created its own team: CSKA for the army, Lokomotiv for the railway workers…even the Secret Police got involved. Today their club is one of the most recognisable names in Russia’s football scene: Dinamo Moscow.

Displeased with the political dimension the sport had taken on, one man set about shaking up the status quo. And so in 1934 the most successful club in Russia’s history, Spartak Moscow, was born. Named in honour of Spartacus, the rebel slave turned gladiator of Roman legend, Spartak Moscow was known as “the team of the people.” Its founder, Nikolai Starostin, also played in the team alongside his three brothers. The Starostins quickly became the greatest football stars of their day.

However, the astonishing success of Nikolai Starostin’s football army of rebel slaves also put them under the scrutiny of the highest powers in the Soviet Union. In 1942 the four Starostin brothers were arrested and sent to Siberia. They had been accused of a plot to blow up Lenin’s mausoleum and assassinate Stalin. The charges arrived suspiciously soon after their patron, head of the Komsomol youth organization Alexander Kosarev, had fallen out of political favor.

Fortunately for Nikolai Starostin, the guards at the labor camp he was sent to were staunch Spartak supporters. He was given some level of protection and asked to organize prison football matches. And then, at the personal order of Stalin’s football-loving son Vasily, Nikolai was brought back to Moscow to live with him in his home.

After his political rehabilitation, Starostin returned to Spartak as their manager, bringing them – and Russian football – onto a level playing field with the rest of the world. His less fortunate brothers stayed in the Gulag for the entirety of their sentence.

This June, the Russian Federal Security Service finally declassified some materials in the case against the Starostins, revealing that the testimonies against them were obtained by torturing their close friends, family and colleagues. Even so, to make claims against the brothers stick, the charges had to be reduced. Instead of attempted assassination, the Starostins faced a number of bizarre accusations that included stealing a wagon filled with factory goods, embezzling funds and promoting the values of “bourgeois” sports.

Those days seem firmly in the past. On the centenary of the Russian Football Union, Putin and the heads of FIFA raised their glasses to MacPherson, the 19th century Scottish industrialist who brought football to millions of Russians.