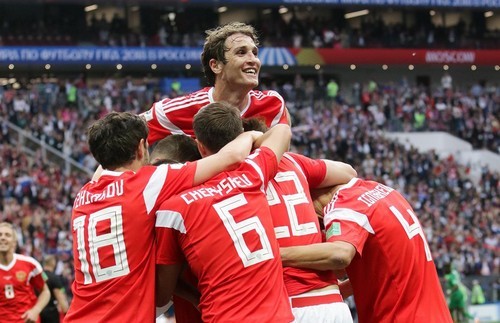 Robbie Williams partied on stage – perhaps even like a Russian.

The World Cup trophy is revealed to the crowd on the opening day of the tournament.

Russia and Saudi Arabia played the first match of the World Cup, ending in a resounding Russian win.

The expectations for Russia in its game against Saudi Arabia were low, but it managed to surpass them wildly.

The crowd went wild at the first game of the 2018 World Cup.

Members of the Russian team celebrate their historic win against Saudi Arabia.

Russians celebrated their team’s victory both in and outside the stadium.

Fans of the Russian team expressed their joy at their national team’s victory.