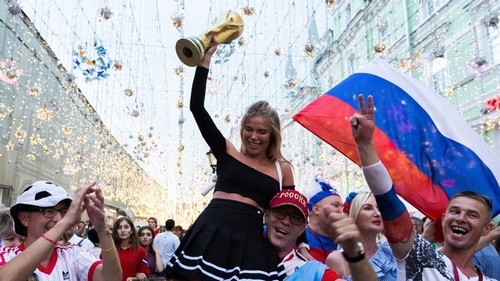 Broken park benches on Nikolskaya Ulitsa were a small price to pay for the budget boost and tourist influx that the World Cup brought to Moscow, Mayor Sergei Sobyanin said in an interview this week with Interfax.

“The festival of fans on Nikolskaya became an unplanned test for Moscow’s municipal services,” Sobyanin said in the interview published Wednesday, praising both the cleanup crews and fans.

“Only the benches on Nikolskaya suffered, but not from malicious intent. They just weren’t designed for such a crowd of big guys,” he said.

Financially, Sobyanin said he had “no doubt” that the city’s budget would see “billions” of rubles in additional revenue from a tourist influx after the World Cup.

“Expenses for the tournament proved to be one of the most profitable investments in the history of the city,” Sobyanin told Interfax.

Earlier in July, Deputy Mayor Pyotr Biryukov the Komsomolskaya Pravda tabloid that some tourists had stolen light installations from the pedestrian street as a keepsake.

“We don’t mind. We’ll hang up some new lights later, but the fans will be left with a souvenir from Moscow,” he said.

Inside a Moscow Art Studio