An exhibition dedicated to constructivism and the avant-garde was opened in Novosibirsk. The exhibition is held in the foyer of the second floor of the Palace of Culture “Revolution” and is divided by stands into several themes

In DK “revolution” on March 25 opened the exhibition “Constructivism is here!” He and devoted to the avant-garde era in Novosibirsk, the main areas that have begun to grow rapidly at the time, and associated buildings.

The exposition is divided into a dozen stands: each of them is dedicated to one of the important areas of Novosibirsk life in the 1920s and is associated with one of the constructivist buildings that were built at that time.

For example, the Politics stand is associated with the House of Lenin and the figure of Vladimir Lenin, Nauka is dedicated to medicine and the city hospital building, Sport is to the Dynamo complex, Life is to the House with a Clock and a New Life, and so on.

The exhibition-festival was being prepared for about a year; a number of Novosibirsk museums, many private collectors and student volunteers took part in it. One of the organizers, Evgeny Dubrovin, named the original Maxim machine gun among the most valuable items, which was provided by the Museum of Funeral Culture for the duration of the exhibition. According to him, the machine gun was an industrial instrument of killing, as iconic as the guillotine in its time.

In addition, he named a copy of the death mask of Vladimir Lenin and a rare model of a typewriter as important items at the exhibition.

– Today we no longer understand what Lenin of that time was, what revolution was. There is a film by Dziga Vertov called “The Eleventh” – then it was clear to everyone that it was about the eleventh year of the revolution, because people lived for years of revolution, then the history of five-year plans began, – explained Evgeny Dubrovin. – The typewriter is already an industrial tool and an instrument of politics; there were, one might say, workers in this industry.

The exposition also includes items from School 34, which was demolished last year: a wooden chair with an unusual back and a wall clock. Before the demolition, they were saved by the staff of the Gallery of Time.

One of the items was created as souvenirs specially for the exhibition – this is the soap of the Sibkraisoyuz plant, which was produced at the Novosibirsk soap factory and sold throughout the USSR. 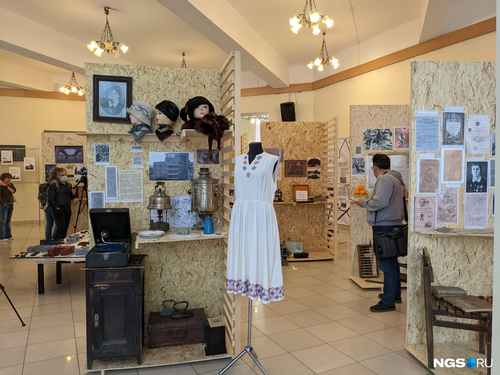 The center of the exposition is a model of the central square of Novosibirsk at the beginning of the 1930s, when the main building of the square, the House of Science and Technology, was still under construction, but was already surrounded by monuments of constructivism.

The exhibition-festival will run until April 7, admission is free. Several curated excursions are planned for the weekend, as well as film screenings, master classes and expert discussions on constructivism in Novosibirsk.

Earlier, Novosibirsk hosted an exhibition-research that talked about modernism in Siberia and touched upon the era of constructivism: it showed a unique 100-year master plan of the city and projects that never came to fruition.

They want to cut 2,000 trees in Novosibirsk for high-rise buildings