Alena was born and raised in a prosperous, friendly, loving and wealthy family. The girl lives with her parents and younger brother Tolik. Her older brother Fedya recently died tragically. Alyona studies at the Novosibirsk College of Hairdressing and plays volleyball.

When the girl found out that she was expecting a child, she was no longer scared by the fact of early pregnancy, but by the fact that her former boyfriend Sasha, who was four years older than her, would be her father.

Sasha lives in the neighboring village of Marusino. He finished nine classes and immediately got a job at a car wash as a car washer. Sasha found Alena on social networks, added as a friend and wrote to her, they began to communicate, and after a few months they began to meet. At that time, the girl was 14 years old. She immediately told her parents about Sasha, and after a while they adopted her daughter’s boyfriend.

Soon Sasha introduced Alena to his sister Ira, with whom he lived. Previously, the guy lived with his parents. His father drank and beat his mother. The woman divorced him and got along with another man. Sasha’s relationship with him did not work out. Alena told her parents about the difficulties in the boy’s family, and soon he began to live with their family on condition from the parents – to sleep in different beds.

After a year of relationship, Sasha began to strongly control the girl, check her phone. At first, the guy just shouted at Alena, then he began to raise his hand for almost any reason. The girl attributed the bruises to volleyball. She was afraid to tell the truth – Sasha blackmailed her with their intimate video.

Upon learning that Sasha was beating their daughter, the parents were shocked and kicked the guy out of the house. The guys parted and did not communicate for six months, but after the death of Alena’s brother they met again, and after her friend’s birthday, the girl found out that she was pregnant.

At first Sasha did not believe in the news of the pregnancy and said that this was not his child. Then the girl turned to the guy’s sister for help. Soon Sasha came to Alena, talked to her and her father and said that he was ready to take responsibility for the girl and the child and live together. But Alena’s parents did not let go, Sasha was also not allowed to live again, and the guys continued to live separately. The guy was in no hurry with the proposal; he did not accompany Alena during his visits to the doctors, referring to being busy at work. The girl offered the guy to find a better-paying job to support his family, but he could not.

Soon, Sasha began to often stay late at work. Yana’s friend told Alena that Sasha cheated on her with his ex-girlfriend Leroy. The guy denied at first, then tried to apologize and, without having achieved forgiveness, got along with his ex-girlfriend. Then he decided to reconcile with Alena, but her dad drove him away. The girl did not respond to attempts to make peace and decided not to give the guy any more chances.

Time passed, Sasha occasionally appeared in Alena’s life, the rest of the time she often saw his photos with other girls on social networks and wrote an exposing post about the guy on Instagram. After that, Sasha came to talk to her and brought a friend’s girlfriend with him so that Alena would be jealous of him. 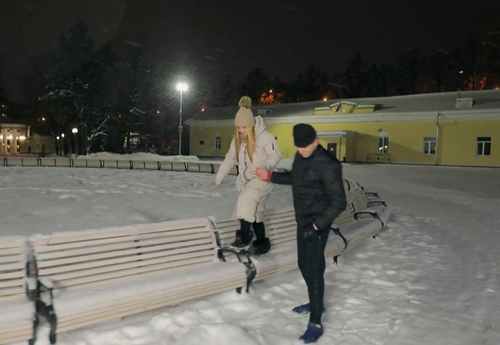 Soon Sasha’s ex-girlfriend Lera apologized to Alena and said that she did not know about her pregnancy and about their relationship with her boyfriend. Sasha again began to look for a meeting with Alena, but the girl ignored all his attempts. One day a guy came to Alena, but she chased him away. And then she gave him another chance. The parents did not approve of this, but hoped for the best.

For almost the entire pregnancy, Alena went to study in Novosibirsk, here she went to the doctors. Sasha did not go to any ultrasound scan with the girl. He sometimes came several times a week, sometimes disappeared and spent this time with friends and other girls. In preparation for the birth of a child, Sasha practically did not participate. And once he arrived, made a scandal and broke Alena’s phone, finding in it a correspondence with a subscriber. He insulted the girl and threatened her.

Alena went to give birth to Tomsk. The contractions were long and painful, and the girl was given an epidural. Soon little Vasilina was born. Alena wanted to be met only by her parents and brother, but Sasha came to the discharge, and he was the first to be admitted, deciding that he was the girl’s husband. Alena was upset that such an important moment did not go the way she wanted.

After being discharged and returning to Krivodanovka, Sasha and his family came to visit Alena’s family to look at Vasilina and finally meet. We agreed that Sasha’s relatives will help financially.

Alena’s mother notes that the girl is a wonderful mother. The girl herself is very happy and completely devotes herself to her daughter. Little Vasilina helps Alena’s parents to escape from sad thoughts about their deceased son, and her younger brother Tolik is already dreaming of how he will play with her.

The girl did not enter Sasha as a father in her birth certificate. When the guy found out, the young parents quarreled. Alena allows Sasha to see her daughter, but she no longer wants to build a family with him. The guy plans to do a DNA test and establish his paternity in court. Alena doubts that he will do it. But now she is busy taking care of her daughter and plans for the future.

Last year, the heroine of the show “Pregnant at 16” was a Siberian woman Snezhana – the girl said that after learning about her pregnancy, her mother put her out on the street.

In Berlin, three children were taken from a family from Novosibirsk