Today, there is snow in the floodplain of 1st Yeltsovka, but local residents have no doubt that construction work will begin near the river at the beginning of the season . Novosibirsk residents turned to the Prosecutor General of the Russian Federation because of the construction site at 1st Yeltsovka

At the end of last year, the mayor’s office announced that they were starting work on the formation of a new park in the city center in Novosibirsk – it should stretch from Krasny Prospekt almost to Ippodromskaya Street along the banks of the 1st Yeltsovka River. But while officials are solving bureaucratic issues with land, developers receive it on lease, and then construction permits. Local activists receive formal replies to their requests, while officials hide from them.

Tired of this, the representative of the initiative group “Yeltsovka – First!” Anastasia Lezina wrote an open letter to prosecutors and investigators – we are publishing it in full.

According to information available in the media, a land theft scheme has long existed in Novosibirsk. According to this scheme, they tried very stubbornly to steal land in Narymsky square, and only thanks to unprecedented persistence, perseverance of citizens and personal intervention of the President of the Russian Federation, the square was defended. A similar situation is now with the lands in the floodplain of the 1st Yeltsovka River. We are talking about the section between the Europe shopping center and the Soldier’s bridge. Since December 2019, an initiative group of citizens has been sending messages about a crime to the Investigative Committee for the Novosibirsk Region, having submitted evidence they independently collected.

All messages of the Investigative Committee forwarded to the mayor’s office – just to those persons who committed these crimes, which contradicts paragraph 6 of Article 8 of Federal Law-59 “On the Procedure for Considering Appeals of Citizens of the Russian Federation.” 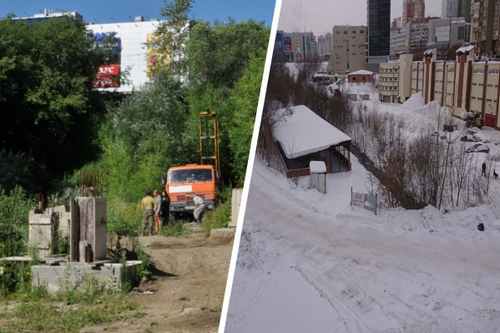 The leadership of the Investigative Committee did not react to our complaints, the investigators literally ran away from us, and only on November 30, 2020, with colossal pressure from citizens, repeated appeals to the Chairman of the Investigative Committee of the Russian Federation, Alexander Bastrykin, a pre-investigation check began, as a result of which a criminal case was initiated according to article 286 of the Criminal Code of the Russian Federation (“Excess of official powers”).

The prosecutor of the Zaeltsovsky district, Oleg Alekseev, canceled the decision to initiate a criminal case, the Investigative Committee of the Zaeltsovsky district wrote an appeal to the regional prosecutor’s office. Now the Deputy Regional Prosecutor Igor Mishchenko answers that “the official has committed an action that clearly goes beyond his powers and entailed a significant violation of the rights and legitimate interests of citizens, or the interests of society and the state protected by law”. But, despite the comic and paradoxical nature of the situation, he again did not find grounds for initiating a criminal case.

We, an initiative group advocating for the preservation of a site of wildlife in the floodplain of the 1st Yeltsovka River, appeal to the regional prosecutor Yakov Khoroshev, the Russian prosecutor general Igor Krasnov, the chairman of the Investigative Committee of the Russian Federation Alexander Bastrykin with a request to restore law and order and protect the interests of an unlimited number of persons ( about 100 thousand people live only within walking distance from the river)!

Yakov Evgenievich, we have been scribbling messages for more than a year, forgetting about families, hobbies, taking time from sleep, trying to get a personal appointment, but never got an answer. Please tell us what other crimes committed by officials of the mayor’s office are needed for a criminal case under Article 286 of the Criminal Code of the Russian Federation and articles for environmental crimes to be initiated. We ask you to finally do this.

Using a previously worked out scheme in court, the mayor’s office gave the plots away without carrying out the appropriate competitive procedures. On the banks of the 1st Yeltsovka, trees were cut down, the fertile soil layer was removed, the soil was polluted, piles were driven in, as a result – damage to nature, significant harm to the environment, residents are deprived of the opportunity to spend their free time there, play sports, walk with children. The signs placed along the river look like a mockery: “Water protection zone, protected by the legislation of the Russian Federation.”

Last year, one of the initiators of the project, Daria Drushchenko, also explained why the statements of the representatives of the mayor’s office do not inspire optimism among local residents and activists who have been fighting for the creation of a park in the river floodplain for many years.

In October, NGS journalist Liza Pichugina in her column told how the territory in the river floodplain is cut year after year into plots for useless parking lots.

And NGS journalist Stas Sokolov found impressive examples of the improvement of small rivers in Spain – not the richest European country. The order was given personally by Stalin: the journalist found in the archives of the NKVD the story of the execution of his family