Novosibirsk residents told the details of the brutal beating of a woman in the entrance. There are still drops of blood on the ground floor.

Eyewitnesses told the circumstances of the attack on a woman at the entrance of a high-rise building on Grebenshchikov Street in Novosibirsk.

The incident took place on Saturday 13 February. A video surveillance camera recorded how a man attacked his companion, knocked her down and began to beat her head on the tiled floor.

Later, doctors diagnosed the affected woman with a concussion. Now the question of initiating a criminal case is being decided. NGS crime journalist Alena Istomina visited the scene – neighbors said that at least several people saw a woman being beaten, but for some reason passed by.

“Everyone has watched it 50 times already.”

According to one of the residents of the house number 8 on Grebenshchikov Street, the conflict took place on the first floor at about 19:00. There is no security in the house, but there is a camera next to the elevator.

– Everyone has watched this footage 50 times already. Judging by the video, many people passed by at that moment, and for some reason it happened … And I saw the entire first floor through the peephole. They are definitely not local, they were visiting someone, – says the man.

He assumed that the man and woman were waiting for a taxi, but the car took a long time to go. According to him, the recording shows how long they walked on the first floor. An ambulance was called by a girl from the 10th floor, who entered the entrance during a fight. 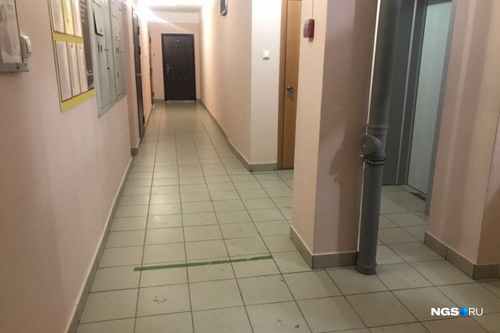 Another woman who lives on the ground floor said that she had not heard anything. According to her, after the beating, blood stains were everywhere – on the floor and on the post.

Later it turned out that during the conflict, a woman and a man were standing next to the elevator. He asked his attacker, “What are you doing?” Then they left.

– When my sister entered the entrance, she heard screams, sounds, as if someone was beating. Then she saw them, said that the guy was bothering the woman, said: “Get up, get up.” My sister came up to me and called the police, but it is not known who called the ambulance, ”says Anastasia, another resident of the house.

Another neighbor said that he passed the couple before the beatings. He noticed that both were drunk, while the man “could not stand.”

According to the press service of the Main Directorate of the Ministry of Internal Affairs for the Novosibirsk Region, the man and woman who were on the video knew each other, but it is not clear why the fight took place.

– On February 13, the police received a report of a fight at Grebenshchikov, 8. Police officers immediately left for the scene. Identified the suspect. He was questioned and taken to the department for further investigation. Now this fact is being checked. The victim was given a referral to undergo a forensic examination, which will establish the harm caused to her health. It was previously established that she received a concussion, ”the police said.